What a Tangled Web we Weave 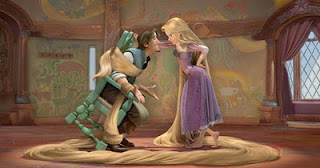 I couldn't have asked for better inspiration to follow up my last post about the low status of girls' stories, than news about Disney's next animated feature, Tangled. The LA Times has reported on the film's title change from Rapunzel in order not to alienate boy viewers. The President of Disney and Pixar animation reportedly remarked, ""Some people might assume it's a fairy tale for girls when it's not. We make movies to be appreciated and loved by everybody." Of course, if a story is for or primarily about girls that rules out interest from boys, but stories about boys are seemingly "loved by everybody" regardless.

There are some changes to this filmic version that suggest a surface modernisation of the heroine. Much like Princess Fiona in Shrek, apparently "the demure princess is transformed into a feisty teen." Those who've given a few moments thought to analysing that film (well, at least students in a subject I teach at Deakin University have), find it easy to see the "feisty" heroine is still rendered subservient in needing to be rescued by her prince, by her natural role as the one who cooks and cares for others and her obsession with ensuring that she fits the standards of physical attraction required by her suitor.

It remains to be seen how Rapunzel fares as a heroine, but the hero "bandit" named Flynn Rider sounds like he will be injecting the right amount of masculine protection-and most importantly, action sequences- into the mix.

Scarily, this perception that "girls' stories" alienate boys is having an affect on which movies ever make it on to the screen. The complex Hans Christian Anderson story "The Snow Queen", which I loved as a child (and which includes both a strong girl and boy in its narrative), is reportedly now on the scrap heap because the studio has had "too many" girls' films in its schedule. So the simple presence of the word "queen" is too feminine? Or is it because it's about a girl who saves a boy? Would Beauty and the Beast be made today with its overt reference to a girl in the title and no action hero inserted to balance out the puffy dress quotient? Not that I'm a fan of the puffery, just irritated by the universalising of stereotypically masculine traits and the segregation of femininity.

Catmull believes that the recent Disney animated film The Princess and the Frog suffered at the box office because of its overt call to girls: "Based upon the response from fans and critics, we believe it [box office takings] would have been higher if it wasn't prejudged by its title". There are numerous other factors to consider here, including the film's use of traditional hand-drawn animation, which has clearly been struggling against CGI children's films in the past decade. On another front, The Princess and the Frog was the first to feature an African-American heroine. Already it had to challenge the perception that only girls watch girls' stories and, in addition, that white children are only interested in reading about or seeing white characters like themselves.

And so the box office takings of this film have a flow-on effect on the belief that stories about girls are only for girls, and stories about non-white characters are not for the white middle-class only serving to reinforce the homogenous norm even more rigidly than before.
Posted by Michelle Smith at 9:59 PM