What "Fairy Tale" Endings Meant, Once Upon a Time

Fairy tales are badly misunderstood. When we talk about 'fairy tale' romances, as Chloe Angyal did in The Age recently, we ignore the darker and more subversive history of these ubiquitous stories and the essential part of the women who originally told them. If you only know fairy tales from the simpering princesses in Disney films, then you're missing out on cross-dressing swordswomen, defecating girls and sexually active maidens.

While it is 200 years since the Grimms collected fairy tales as an academic exercise to preserve the folklore of Germany, the passing of time has made us forget that it is not the Grimms who invented them. Fairy tales were usually told by the fireside in the evening as people, mostly women, worked at essential chores such as spinning. It is no surprise then that the tales the women spun, such as Rumpelstiltkin, often included the spinning wheel as a symbol of their labour.

These oral tales were not specifically intended for children and early versions are frequently crude and highly sexual. In one version of 'Little Red Riding Hood' collected by the Grimms, but later made wholesome when the second edition of their Children's and Household Tales was published for a wider audience, the heroine escapes the wolf by telling him she has to go outside to "make a load". Before the Grimms removed references to sex, the witch who keeps Rapunzel imprisoned in a tower knows her not-so-innocent prisoner has been letting down her hair for a man when her clothes become too tight because she is pregnant.

Various cultures have their own variants of these tales that are perhaps not 'as old as time' as Disney suggested in their 'Beauty and the Beast', but which have a far longer history than we afford them. The Chinese equivalent of Cinderella, Yeh-hsien, dates from AD 850. In place of a fairy godmother, a ten-foot long fish rewards her with gold, pearls, dresses and food.

In seventeenth century France, it was women who pioneered the literary fairy tale that adapted oral tales for educated adult salon audiences. History has erased these women from public view, such as Madame d'Aulnoy who coined the term contes de fées (fairy tales) and wrote several volumes of them. We tend to only acknowledge Charles Perrault, who wrote the version of 'Cinderella' (minus Walt Disney's pumpkin) that we know today.

French fairy tale writers created many stories that did not survive the process of sanitising fairy tales for children that the Grimms began in the nineteenth century. Women were not helpless princesses waiting for Prince Charming in these fairy tales. In Marie-Jeanne LʼHéritier's 'Marmoisan' (which I read recently at the Monash Fairy Tale Reading Group), the heroine, Leonore, dresses as her twin brother, Marmoisan, to take his place in war and distinguishes herself in battle. Marmoisan died in disgrace after he attempted to scale a rope ladder to rape a married woman and was impaled upon her waiting husband's sword.

These literary fairy tales and many of the oral versions do not show women as victims and men and heroes as we expect today. Passive and obedient heroines have been gradually introduced by male collectors and re-tellers of the tales across the past two-hundred years, especially as they have sought to socialise children into masculine and feminine roles. The glittery Disney collection of princesses obscures the way that fairy tales often showed girls as mentally or physically strong. They also criticised and punished men for their exploitation of women.

While Little Red Riding Hood can kill the wolf in a pot of boiling sausage water in one early version, by the time of Perrault's first written adaptation in 1697, she is relegated to his dinner. The Grimms then transformed what was often a bawdy story to one entirely about female dependence. Their version introduces the figure of the huntsman who saves Red by cutting the wolf open with a pair of scissors.

The Grimms also excised all traces of sexuality from their heroines and instead promoted stifling ideas of feminine innocence and purity. While this is partially understandable given their intent to revise the tales for children, at the same time as deleting the sex, they ramped up the gory violence in ways not present in the oral tales they were supposedly recording. In their second edition of tales, they decided to punish Cinderella's step-sisters by having their eyes pecked out by birds.

Paradoxically, if we want our culture to present girls and women with empowering models of femininity, in the main, the seventeenth century versions of fairy tales are better candidates than those of recent times. Some literary writers such as Angela Carter have already rewritten fairy tales in a way that returns power to their heroines. Yet the current crop of film and television fairy tale adaptations, such as Mirror, Mirror and Once Upon a Time, have the potential to overturn the popular trend of passive heroines in fairy tales in the past two centuries on a wider scale.

If we look to the history of fairy tales, we can see amid the hundreds of variants of each tale how much they have changed across time and place. The pink princess culture that absorbs many girls today is something that they have internalised from more recent conservative, sanitised versions of fairy tales that suggest that a woman's greatest achievement is to be innocent and beautiful. If we returned to telling the fairy tales of old, aspiring to be a fairy tale princess wouldn't necessarily be such a bad thing.

As part of the Glen Eira Storytelling Festival, the Monash University Fairy Tale Reading Group is hosting a fairy tale salon inspired by those of 17th Century France on 23 June at Monash Caulfield. 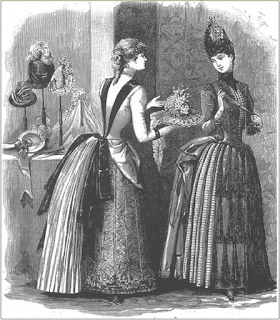 I had the pleasure of being invited to speak at The Johnston Collection (which includes the wonderful Fairhall House museum) last week on beauty in Victorian girls' and women's magazines. I chose magazines in particular because the second half of the nineteenth century was a time in which more people became literate, more magazines were able to be published more affordably, and technological improvements meant illustrations and fashion plates became commonplace. Magazines were the dominant media form, especially as books remained relatively expensive. Not only were women specifically targeted as readers in the nineteenth century, but they were also newly imagined as consumers. The arrival of the the department store, a concept borrowed from France, transformed how items for the self and the home were bought, with their extensive ranges of branded goods arranged in lavish displays designed to be browsed. The illustration above of a woman selecting from a choice of hats from Myra's Journal of Dress and Fashion (Sept. 1885) is one of many depictions of women in the act of shopping that showed its new-found importance to femininity.

Most magazines became heavily dependent on advertising. Even quality publications like The Queen (which became Harper's and Queen) placed ads on almost half of its pages by the mid-1880s. While people complain about ads taking up column inches and screen space today, the strong presence of advertising in the print media is not new. For girls' and women's magazines, the ads that were included were often for products that promised to improve the reader's appearance, with corsets, skin creams and hair 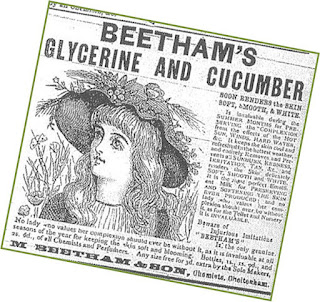 Cosmetics, however, had a bad name for encouraging artifice and deception. Charlotte Yonge, the editor of the Anglican girls' magazine The Monthly Packet and author of popular books such as The Daisy Chain opposed cosmetics as a form of lie: "All attempts to pretend to beauties that we do not possess are clearly falsehood, and therefore wrong." Young women in particular were warned away from cosmetics because they were considered more vulnerable to potential damage to their "moral character" because of their sexual associations.

Cosmetics were therefore not commonly advertised but products that would purportedly improve the skin by removing freckles, tans, redness and roughness were promoted because they did not transgress beliefs about "natural" beauty being superior than artificial aids. This ad for Beetham's Glycerine and Cucumber from Woman (11 April 1894) promises to give the user soft, smooth and white skin that "blooms". 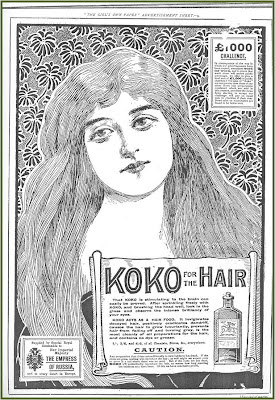 Along with facial creams, hair products also promised natural improvements to a woman's beauty. Koko for the hair, for instance, is described as a "hair food" that promises to do everything from preventing greyness to eradicating dandruff, but it was not only the hair that benefitted from treatment, as the ad suggests that Koko also stimulated the brain. After brushing with Koko readers are directed to look into a mirror to see the increased "brilliancy" in their eyes, which suggests a benefit to health and well-being, not only appearance.

In the lecture I showed a contemporary Maybelline magazine ad featuring the company's familiar slogan "Maybe She's Born With It. Maybe It's Maybelline" to show the continuation of these ideas about natural beauty (or at least cultivating the appearance of natural beauty) in advertising. It's a real conundrum that women are encouraged to desire products that will "improve" their looks, but they ought to be working to make it seem as if they were "born with" their cosmetically enchanced charms. The many contradictions surrounding women's beauty in Victorian magazines seemed to strike the audience at the lecture as none too dissimilar from those we see in the popular media today. And nowhere are these resonances more obvious than in early advertisements for weight loss, such as Trilene tablets, which promised to "cure corpulency permanently". With that degree of effectiveness, how surprising that they're not still in manufacture.

PART TWO TO COME...
Posted by Michelle Smith at 3:56 AM No comments: 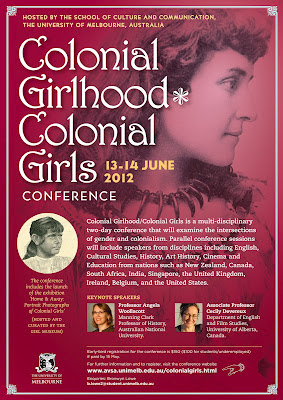 The poster for the Colonial Girlhood/Colonial Girls conference is now finished. Kristine Moruzi and I are very excited to be hosting so many people from around the world whose work we admire in Melbourne in June.

Our keynote speakers are historian Professor Angela Woollacott from the Australian National University and English scholar Associate Professor Cecily Devereux from the University of Alberta, Canada. Professor Devereux's lecture will be a free public lecture on the evening of the 14th of June from 6.00pm in Elisabeth Murdoch, Theatre A, at the University of Melbourne's Parkville campus. The talk is entitled "Fashioning the Colonial Girl: ‘Made in Britain’ Femininity in the Imperial Archive".

Registration is now open for the two conference days. We have a conference site ready with further details about the event and a link to our secure registration site.

Posted by Michelle Smith at 9:06 PM No comments: