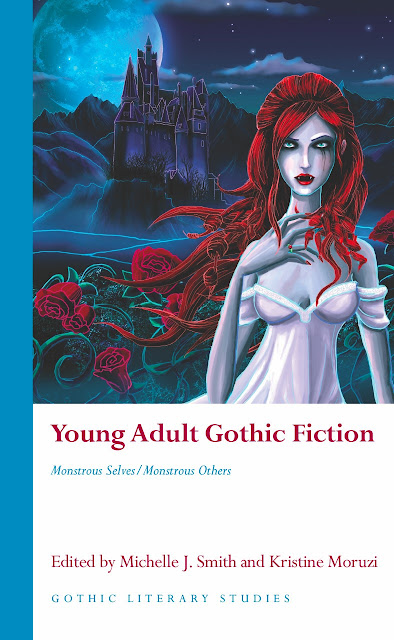 I have an co-edited collection entitled Young Adult Gothic Fiction: Monstrous Selves, Monstrous Others about to be published in June by University of Wales Press. It's packed with wonderful essays from children's literature friends old and new. I've written a chapter with my co-editor Kristine Moruzi on the intersection of fairy tale with YA Gothic, which I think is one of the first takes on the intersection of these three areas.
This collection is the first to focus exclusively on twenty-first-century young adult Gothic fiction. The essays demonstrate how the contemporary resurgence of the Gothic signals anxieties about (and hopes for) young people in the twenty-first century. Changing conceptions of young adults as liminal figures, operating between the modes of child and adult, can be mobilised when combined with Gothic spaces and concepts in texts for young people. In young adult Gothic literature, the crossing of boundaries typical of the Gothic is often motivated by a heterosexual romance plot, in which the human or monstrous female protagonist desires a boy who is not her ‘type’. Additionally, as the Gothic works to define what it means to be human – particularly in relation to gender, race, and identity – the volume also examines how contemporary shifts and flashpoints in identity politics are being negotiated under the metaphoric cloak of monstrosity.
TABLE OF CONTENTS

2. Zombies Vs Unicorns: An Exploration of the Pleasures of the Gothic for Young Adults – Patricia Kennon

3. Genre Mutation and the Dialectic of YA Gothic Dystopia in Holly Black’s The Coldest Girl in Coldtown – Bill Hughes

Section 4: The Human and the Non-Human

9. Accepting Monsters: The Visual Gothic in I Kill Giants and A Monster Calls – Debra Dudek

12. Testimony from Beyond the Grave: Comparing Girls’ Narratives of Sexual Violence and Death in Gothic Fiction – Lenise Prater

Posted by Michelle Smith at 12:11 AM No comments: