While it's due out on DVD in the US within weeks, the documentary film American Teen has just opened in Australian cinemas. What grabbed me instantly about the preview was the way in which the categories they slotted each of the teens into reminded me of the John Hughes' classic The Breakfast Club. Little did I know how intentional this was. The film poster entirely replicates the promotional image from the '80s film. Some would say it parodies the original poster, but I'm not sure how much parody is happening in this documentary. It seems like the "jock", "nerd", "princess" and "arty outsider" archetypes are being played out in reality. I am keen to see it, though. I need to know if the Ally Sheedy of the 21st century will need to be made-over with a lacy headband, lashings of mascara and a smudge of pink lipstick to finally get a boyfriend.
Posted by Michelle Smith at 4:49 AM 1 comment: 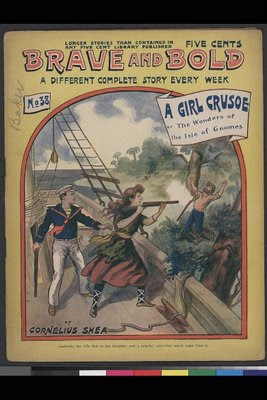 The next side-project I'm hoping to have time to work on is about "Girl Crusoes". That is, fictional girls who become stranded on islands who must seek out their own food, construct shelter, and battle or placate "the natives". There's a new film called Nim's Island based on a novel by an Australian author I believe that tells a contemporary version of this sort of tale-- the blurb I read mentions communication via a laptop, so things have moved on from the Gilligan's Island coconuts. I'm finding quite a few nineteenth century examples, though. I'm not sure of the date of this American dime novel, but I'd love to be able to take a look at the actual story of the rifle-toting girl on the cover of this edition of Brave and Bold.
Posted by Michelle Smith at 2:56 PM No comments: 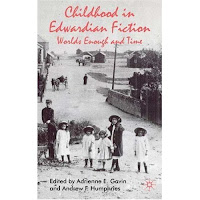 December 5 is but a few weeks away, and it is a momentous occasion because my first book chapter will be available to clutch in physical form. The book is a collection of articles on Edwardian children's fiction and the article is a gripping account of Angela Brazil's school stories (gripping for the few people who care, perhaps). While I am looking forward to being included in academic databases when a few journal articles appear next year, there is something to be said about your writing being "on Amazon". That said, there is a lot of total crud to be found on Amazon. But I will be revelling amongst all that crud, as part of that miasma of millions of real, published titles.
Posted by Michelle Smith at 6:49 AM 2 comments:

I have, however, been buying a phenomenal amount of Girl Guide and Girl Scout memorabilia via eBay. I have a Girl Scout holy card, complete with Mary showing the girls the way, an original Girl Guide belt (complete with many dangly attachments for hooking useful objects on to), '50s Americana calendars, magazines, a Finnish Girl Guide book of games, and even an old Brownie felt hat with a stencilled-on pixie. It's been amazing to discover the collectable side of the movement. I bought a gigantic book of around 500 pages related to collecting Girl Scout memorabilia. I had to stop myself with the Girl Scout doll collecting book. There is such a thing as too tangential.

Now, prompting the first post back after an unjustified absence is the new Australian federal government television campaign to prevent binge drinking. I'm not sure why the subject of drinking and girls continues to provoke me. The start of it would perhaps be the differing treatment of genders in this regard.

The new ads, one of which can be seen here , rightfully remind young people not to plunge themselves through glass coffee tables after one too many Breezers, end up in brawls or run the risk of injury near the roads as pedestrians. The focus for boys is avoiding fights and physically dangerous situations such as being struck by a car. The suggested danger for girls, however, lies in the likelihood of having sexual intercourse that might later be "regretted". An image shown in the clip with the ambulance officer voiceover depicts a couple being photographed post- an intimate act in the shubbery. The gent in this scene is hastily zipping up his fly, while the girl, whom he is leaning over, is wearing a very short skirt, and is hunched over with her arms folded as if protecting herself.

The text from the newspaper article about the ads reads: "A teenage girl gets drunk and has sex, regretting it immediately. A teenage boy sneaks booze from his parents and is killed after stumbling on to a road while drunk." The wording implies that boys are active. The boy "sneaks" the booze from his parents. The girl "gets" drunk in the same passive way one might "get" the flu.

Could we imagine reversed scenarios? Would an advertisement ever warn a boy that he may regret drunken sex? While of course there are reasons for girls and women to remain aware of their surroundings and safety when drinking, these ads still seem to suggest that the greatest threat to girls is the loss of their virginity, while for boys it is a grand achievement, or at least something that could never be emotionally scarring. For a girl, it must be "special" or she will regret it "immediately". Why doesn't it have to be "special" for boys too?
Posted by Michelle Smith at 1:28 AM 2 comments: