I've begun reading Cordelia Fine's Delusions of Gender, which is an accessible critique of how the neurosciences naturalise gender norms. In the humanities, we're aware of the conception of sex as biological and gender as a cultural construct, with scholars in children's literature on the lookout for how boys and girls are socialised into their genders through books and films. I was, however, unprepared for Fine's book. It pummmels the reader with scientific or psychological study after study to show how these cultural ideas of gender norms can alter the way women perform on maths tests and change the opinions of employers as to a candidate's suitability for a job. Women sometimes have to perform harder to achieve the same thing as a man, but we rarely recognise this. As the book remarks, Ginger Rogers did everything Fred Astaire did, only backwards and in high heels.

It was strange timing that I found myself at the local cricket nets just as I was becoming righteously indignant over some of the studies described in Delusions of Gender. I witnessed my own microcosmic example of Fine's thesis in action. A small boy, of perhaps 8-years-old and with prodigious batting and bowling ability, was being coached by his father. The father was no slouch, delivering some very fast balls to the boy, including some with a real cricket ball (which is a particularly hard missile to be hit with, especially as a child). The boy's sister, who was clearly a few years younger, was the enthusiastic retriever of balls, with dedication to speeding up the flow of the practice. Nevertheless, she was repeatedly growled at for getting in the way of the serious business of turning this grade three child into the next Australian opening Test batsman.

I must admit that she was occasionally pemitted a turn to bat with a miniature bat and the odd bowl of the ball, but the attitude of the father showed that he was in no way serious about developing her skills in case he might like to fashion her in to a cricketer to fulfil his seemingly unfulfilled sporting dreams. The real attention and pressure was on the boy to do well, and the father seemed pleased when the little girl made the occasional request to play on the nearby swings instead. Now they could get on with the real business of the day.

To top it all off, and oddly enough, the little girl had thought it necessary to bring along a long blonde wig (somewhat matted) to the cricket nets. I'd seen it sitting on the ground alongside the spare balls and wondered what on earth it was doing there. At a critical point in the practice, she asked if the father might help her to put it on. You can imagine how enthused he was at this prospect, and he begrudgingly delayed the ascent of his son by one minute when he finally plonked it on her head in a haphazard way. When we left the nets as darkness fell (this practice wasn't going to end just because the sun had set), the girl was taking one of her begrudged turns with the bat, with the blonde wig on her head, making the task that little bit more difficult. She would have to do the same as her brother, in one fraction of the practice time, with little fatherly enthusiasm and encouragement and while wearing a wig that sometimes blocked her sight.
Posted by Michelle Smith at 8:25 PM No comments: 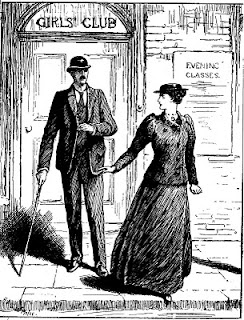 I bought 300 pounds (in monetary terms) worth of the Girls' Friendly Society's monthly newsletter, Friendly Leaves. I'm sure the bookseller thought that he would never live to offload ten bound volumes of them from 1898-1909. Especially as it was a scientific and technical bookshop in Wales where demand for an Anglican Church girls' group's newsletter was unlikely to be raging. And extra especially because it's not a particularly exciting read. (Quite a few years are edited by Christabel Coleridge, constant reader Kris, so I'm happy to share the tedium around.)

Amidst the preaching, advertisements for workers, and marriage and death notices (it's shocking to see how regularly women died in their twenties and thirties- they have the death column in every issue of a publication for a girl's society), were a few fun gems. The best, from February 1899, begins with an explanation of why the magazine does not include fashion plates (illustrations of the latest clothing styles).

Do you know, girls, we are sometimes asked why we don't have more about 'the fashions' in Friendly Leaves ? I think that it would be a great pity to take up our tiny space with fashion plates and notes, when there are so many nice little penny magazines which give such useful ones. We have got other things to talk about. Home Notes and Home Chat and Mothers and Daughters , and many others, give really nice hints how to make one's things look pretty without too much expense, and the pictures help us to carry the directions out. But oh, my dear girls, how dreadful it would be if sweet pretty maidens really could make themselves look like fashion plates! Do you know that they are nearly all monsters? A real woman's figure ought to be seven times the height of her own head. That is the perfect proportion, but I have seen fashion figures into which you could get ten or even twelve heads without any difficulty. They would not be able to walk in at the door....Then the necks! Some of them look as if the girl's head had been cut off and sewn on again, and had to be kept in place by a tight band. And the waist! But I won't forestall what will be said about that in 'The Way to be Well'.

The description of the illustrated clothing models is none too dissimilar from how many people describe catwalk models today, or from the discussions about Barbie's body weight rendering her unable to menstruate (or walk, quite possibly). I was surprised to see this kind of recognition that the fashion world is not reality and can even be seen as grotesque in a turn-of-the-century publication. Incidentally, 'The Way to be Well' didn't have anything useful to offer about waists, but provides a solemn warning not to place 'pig-styes' and 'manure heaps' close to one's house.
Posted by Michelle Smith at 3:24 AM 2 comments: 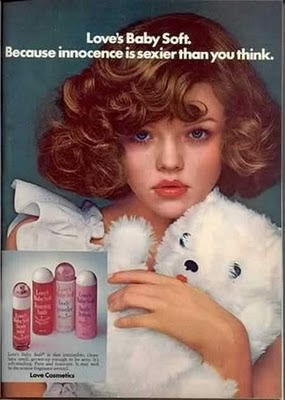 Given the recent reports about a beautiful artistic photograph of a young boy depicted as a peacock being considered inappropriate for sale in a charity auction conducted by the Sydney Children's Hospital Foundation, it is hard to believe that an ad such as this one for Love's Baby Soft ever made it to print with its explicit connection of childhood with sexiness. Then again, we didn't have little girls in extreme beauty pageants in all their spray-tanned, be-wigged and sequinned glory at this point I'm guessing.
Posted by Michelle Smith at 10:42 PM 3 comments:

Yesterday I visited Disney's 'Dreams Come True' exhibition at the Australian Centre for the Moving Image. It was a different experience to the recent Tim Burton exhibition in that it was not packed to the point of queueing to view display cases. In fact, I was surprised by how few people were wandering about the exhibition on the Thursday late-night opening given Disney's domination of children's entertainment in the 20th century.

I know all that is wrong with Disney, from the sweatshop clothing to the dubiousness of the race, class and gender politics of many films. And then there's the pinkified Princess commercial juggernaut. I know that traditional tales have been plundered from a range of cultural traditions and have had the complexity and challenging elements vacuumed right out of them. I know that The Little Mermaid really ends sadly with her turning to foam on the sea. I know that fairy tales are not always about dreams coming true. But in Disney animated features dreams do come true and gruesome story elements are neatly traded for anthropomorphosised animal helpers.

The exhibition focuses on the fairy tale features from Snow White and the Seven Dwarfs (1937) to the most recent adaptation of Rapunzel, Tangled (whose heroine seems to take more visually from a Bratz doll than the traditional Disney princess). Despite all of the critical lenses I could wear, I was still a helpless victim of nostalgia from the first section of cels from Snow White. (I always preferred her because she was dark-haired, unlike the usual parade of fair-haired virtuous maidens.)

There were some surprising snippets of information revealed throughout the exhibit, including unused sketches of Maleficent from Sleeping Beauty with an ominous pet panther and footage of a deleted scene from Snow White in which she instructs the seven dwarfs in the most polite way to eat soup, like an animated June Dally-Watkins.

Apart from a few sections of video (such as the soup sequence and an intriguing look at the multi-plane camera used to add depth to painted backgrounds presented by Walt himself) and some maquettes, it was a largely "wall-based" exhibition. Well, apart from the welcome presence of fairy tale books sourced by Disney in Europe that were used as visual references by his animators. A broader exhibition encompassing other animated films and shorts and the Disney theme parks would no doubt have appealed to a larger audience, but perhaps it could never be contained within any viable exhibition space.

With physical progress through the exhibit, which was ordered chronologically, came a sense of declining magic in the animation process. Cels were no longer hand-inked by the 1990s and the laborious and fascinating techniques of old are gradually being superseded by computer animation. It seems telling that this change in production coincides with the decline in popularity of the Disney-fied earnest fairy tale musical. Disney has signalled its intent to leave fairy tales aside in future animated features, but perhaps rather than a turn away from these stories, Disney might be wise to return to more authentic versions of them, complete with enough shock and awe to compete with contemporary children's entertainment that does not promote the Disneyfied idea of childhood innocence, dreams always coming true, and the homogeneity of 'dreams' as simply a desire for a girl to be married.
Posted by Michelle Smith at 3:50 AM 2 comments: