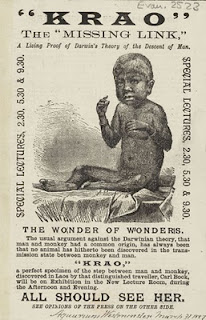 I have just finished writing a draft of an essay about the first Tarzan novel. While it felt strange to be meddling in the territory of boyhood (though I had some familiar materials about Darwinism and Boy Scouting to include), I managed to cleverly generate a footnote about a girl in the process so that I did not have to totally separate myself from girlhood.

Krao was a girl from Thailand (known as Siam at the time) who was extremely hirsute. She was afflicted with hypertrichosis, a condition that most visibly results in an excess of hair on the body and face. You might have seen images of other people suffering from severe examples of the disorder, such a Lionel "the Lion Faced Man", who is also pictured here, and the present day examples of Larry and Danny Ramos Gomez (known as the "wolf boys"). 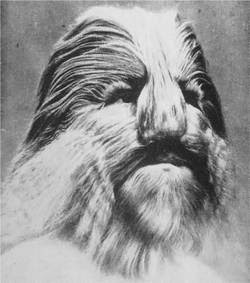 Krao seems particularly interesting to me because she was "discovered" not long after the publication of Charles Darwin's famous works on evolution and sexual selection, On the Origin of Species and The Descent of Man. As the leaflet from one of her exhibitions at the Westminster Aquarium in London shows, she was touted as the "missing link" between ape and human. While Darwin said that humans had developed from an "ape-like progenitor", this did not mean we were descended from apes. (Though Darwin did say he would rather be the descendent of a clever baboon than some of the "savage" races he had seen in the wild.) Nevertheless, in popular thought, many people imagined that there had to be a being that sat mid-way between the ape and human.

There were other examples of people with disabilities exhibited as "missing links", such as the microcephalic black man, William Henry Johnson in the United States (also know as "Zip, the What is It?"). Krao seemed to be the most widely travelled and frequently exhibited, mostly because her condition meant she required little trickery to convincingly exhibit as the missing link. She spent much time in the United States of America in museums and carnivals, even purportedly ending up as a bearded lady at Coney Island. On her return exhibit at the Westminster Aquarium after some time in the US, according to an excellent article on Krao by Nadja Durbach in Victorian Freaks , Krao's bodily development into womanhood elicited some concern by scandalised members of the public. One outraged letter writer felt that Krao surely had to be the result of bestiality. Durbach describes the lengths that were gone to in order to prove that Krao had been civilised by British education and she was often dressed in fine clothing as further evidence of her transition. It is hard to believe that this constituted entertainment, but then, reality television seems to be the modern version of the freakshow diguised as "self help" in examples like The Biggest Loser.
Posted by Michelle Smith at 7:15 PM No comments: