The Embarrassment of Children's Literature

We hide things because we are ashamed of them. Because we know that the norms of our culture will say that there is something embarrassing about a particular act or belief. And so it is a welcome thing that we do not have to hear about the health benefits of adopting a nudist lifestyle from the person we happen to sit next to on a long-haul flight. The bounds of the cultural norm serve some function to keep the majority comfortable. There are nonetheless areas where the cultural norm inexplicably relegates something outside the realm of acceptable adult behaviour. Neither breaking sexual, religious or political taboos, children's literature nevertheless must be discarded as we reach adulthood or our enjoyment of it concealed. Beyond the perils of the train commuter who feels compelled to buy an edition of Harry Potter with an "adult" dustjacket, in the academic realm, children's literature is flat out even convincing scholars of literature more broadly that it is a valid area of academic inquiry.

If you would accuse me of being overly-dramatic, I would direct you to an article in the English Telegraph about the release of the most recent Harry Potter film. Bryony Gordon, who has tired of the series' marketing hype, extends her criticism to adults who might enjoy reading children's books: "Anyway, it won't surprise you to learn that I don't understand grown adults who like Harry Potter, especially when there are so many other great books out there. It's a bit sinister, actually. In my mind, you may as well sit on the tube reading a Thomas the Tank Engine picture-book making choo-choo noises."

This is meant to be a blog on girls' literature and culture and Harry Potter isn't an exemplary text in its portrayal of girls, with an unattractive, annoying swot as its leading female character (in the first book especially). The assumption that Gordon makes, however, is that adults are wasting their time reading children's books because children's books cannot be "great books". While Harry Potter may not constitute the most innovative or brilliantly written series of books, it's a very wide sweep of the critical broom to discount an entire genre of literature with centuries of history as devoid of literary merit. Her final sentence touches on the perceived need to strictly separate adulthood from childhood. Any dalliance with children's books, films or games might reverse your intelligence to the point of pre-literacy. Or before you know it you'll be erecting a statue of Peter Pan in your sprawling ranch, just a moonwalk away from your replica of a Disneyland train station. The "sinister" aspect is the idea that there is indeed something perverted and warped about adults still finding entertainment in books written by adults for a child audience.

The comments in response to the article also bear out the idea that there is something wrong with adults who read children's books: "Why would an adult raed or attempt to red a book such as Lord of The Rings or Harry Potter. They are childrens' books." Ignoring the assaults on grammar in those sentences, the sentiment is clear, children's books should only be read by children. There is no benefit to be had in reading Neil Gaiman, Oscar Wilde's fairy tales, Lewis Carroll, J.M. Barrie, C.S. Lewis, Maurice Sendak or Philip Pullman. And what did anyone ever get out of young adult fiction like The Catcher in the Rye? It's clearly more adult to have a copy of a gossip magazine in hand that poses such elevated intellectual questions as "has Jordan had her breast implants downsized?" than to read works that might also be enjoyed by children. I suppose this is why all of the thirtysomething men who are obsessed with Star Wars films are also labelled "sinister"? Despite some disturbing uses of lycra on middle-aged spread, I don't see too many articles in major newspapers suggesting that men in Storm Trooper outfits are reverting to toddlerhood.
Posted by Michelle Smith at 9:54 PM No comments: Links to this post 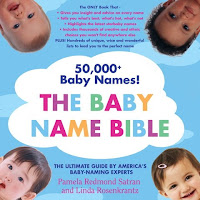 How do names suddenly catch on? Why are kindergarten teachers wiping the noses of Brittanys and Mias, Coopers and Rileys, yet nursing homes accommodate women named Mavis and Edna and men called Theodore and Cecil? I'm not sure why names fall in and out of favour so quickly. Perhaps each generation wishes to separate its identity from that of its parents, and may even seek to reclaim the identity of the generation that was cast off before that. "Old-fashioned" names can magically transform into hip originality.

A research company in Australia has released details of the top baby names in Australia in 2009. What interested me most about the results, more than the return of once-dated names like Isabella, is McCrindle Research's observation that "Australian parents are consistently registering baby names that are undoubtedly gendered." The trend they identify for "soft-sounding" girls' names, versus "firm-sounding" boys' names is I think well-known. A good example given by linguist David Crystal is the fact that "Marion Morrison" would not have made a masculine-sounding cowboy while "John Wayne" was short, sharp and strong.

What is seemingly new is the disappearance of unisex or gender-neutral names. The researchers involved have proposed that this change reflects the "conservative side" of Generation X parents. Just which names would Winona Ryder and Ethan Hawke choose for their children? Well, actually, short-haired, almost-forty Winona has yet to reproduce, and Ethan Hawke has three children, including a darling daughter, Clementine. From the researchers' assumption it seems that Australian parents wish to more firmly locate their children as feminine or masculine right from the get-go. Coupled with the proliferation of "Jacks" and "Williams" you could wonder whether we're carrying misplaced nostalgic for the gender ideals of more than a hundred years ago, when the sexes were generally confined to separate spheres of home and public work.

Is it also part of the backlash against feminism that parents feel that the blurring of gender roles- and names with blurry genders- are just too complicated? Wouldn't it be easier if lines were redrawn as they once were so everyone knew where (and how!) to stand? Mia (proud owner of the most popular female baby name in 2008) will be at her plastic replica ironing board with wrinkled clothing in hand, while Jack (similarly popular for males in 2008) will be working on a woodwork project with his miniature tool set.
Posted by Michelle Smith at 7:39 AM No comments: Links to this post