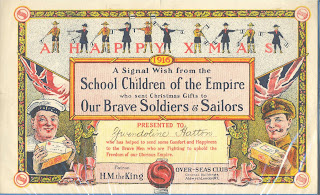 It perhaps comes as no surprise that I was a rampant certificate collector as a girl. At my Catholic primary school, some children would take it upon themselves to collect rubbish in the yard and would then inform someone in authority of their selflessness in order to receive a holy card for their good deed. (From recollection, this sometimes involved presentation of a fully-laden metal garbage bin.) I cannot say for certain that I did not jump on the bandwagon when I learned of the largesse that picking up some chip packets and balled-up Gladwrap could bring.

Certificates were seemingly valued in 1916 as much as 1986. I bought this fantastic one that was presented to the dutiful Gwendoline Hatton on eBay. Somehow it has made its way down through the family for over a century in perfect condition, showing just how important her work was in perhaps knitting some socks or bundling up some clothes to send to a soldier. If you can't make them out, there are Girl Guides and Boy Scouts spelling out the letters "A Happy Xmas" with semaphore. My mother would have said that they have taken the "Christ" out of Christmas, but there are only so many flag-bearing boys and girls that can be fit on a small piece of card.

It's a small sign of how children were inserted into both the war effort and the imagined task of maintaining the British Empire. I wonder how the current fighting in the Middle East is being presented in schools today, if at all? I remember after 9/11 there was solemn discussion about how to prevent children being afraid of terrorism if they had seen the attack on the news, yet so much print culture of the Victorian and Edwardian period deliberately exposes children to news of war, sacrifice and potential invasion. Though it's hard to be too worried by the cheerful looking soldier and sailor on this certificate who appear rosy-cheeked and well-fed.
Posted by Michelle Smith at 4:00 AM No comments:

Article at On Line Opinion About Apostrophes

This piece is not girl-related, although I'm sure that Victorian girls would have been chided had they mispaced or omitted apostrophes in their writing. The Girl's Own Paper's editors certainly took correspondents to task for sloppy handwriting or poor spelling.

Where are the champions of punctuation marks now? Who is there to chide Tattslotto for their 'New Years Eve superdraw'. In this short essay at On Line Opinion, I ponder the fate of the disappearing possesive apostrophe.
Posted by Michelle Smith at 9:55 PM No comments: 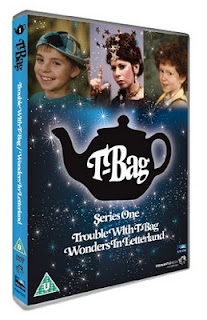 I'm not sure how a child of today could ever proclaim to be "bored". With TiVo or Foxtel IQ (or whatever those special boxes are that 'record' all of your favourite shows digitally), online streaming, cheap DVDs and even, dare I say it, torrents, any television show or movie is available at almost any time. Kids once had to be judicious with their television scheduling. In Australia especially, with only four channels, the TV guide had to be memorised to ensure that a favourite wasn't 'missed' (and when you missed something you really missed it, potentially for years until a repeat was scheduled without notice) and prime viewing availability wasn't squandered.

One of the first programmes in my essential schedule was the British series T-Bag. It was effectively a live-action pantomine that was filmed inside a studio- the outdoor shots resembled The Wizard of Oz on a $100 budget- and was set in a fantasy world. The fantasy world was often located within a teapot from recollection. There is very little chance that T-Bag would get a look-in with child viewers today. The first series I remember, 'Wonders in Letterland', involved the girl heroine Debbie searching for a letter of the alphabet in each episode, with the villain T-Bag seeking to foil her at every turn. T-Bag had a boy side-kick, T-Shirt, whom she had effectively enslaved: he was forced to keep brewing her tea. I am aware this plot description might sound insane to readers outside Britain and Australia. You can watch a snippet on YouTube.

The series ran for nine years. The actresses playing the girl (whose name changed) and T-Bag changed several times, but T-Shirt grew from the cute little button you see on the front of the DVD cover in this post into a lumbering man during the course of the series. Never an auspicious beginning to an adult acting career.

With the 25th anniversary of the original series, the show has finally been released on DVD after relentless petitioning by nostalgic Gen X-ers like myself. I'm about to order the first set of two series, and I'm wondering how much I'll be disappointed after twenty years of growing up since I last saw it. In retrospect, I wonder if it was the female-centredness of the show that I really liked. Both the questing character and the villain are female. It was T-Shirt who was put-upon and who made the cups of tea, not the weak and downtrodden girl. And the set budget must have been redirected to the costuming of T-Bag, who never failed to be wearing an extravagant gown or elaborate headdress. The cardboard backdrops melted into insignificance with those outfits. Now they'd use CGI and T-Shirt would have hair like Justin Bieber.
Posted by Michelle Smith at 2:43 AM 2 comments:

Girl Guides article in The Age 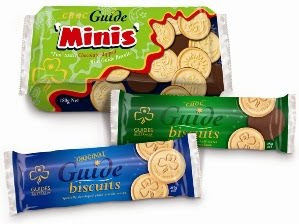 It was difficult to have an opinion on Girl Guiding. The piece initially began as a historical "did you know" jammed full of interesting oddities, but it was not opinionated enough for an opinion piece. This is why I inserted the slant about how Guiding might be something of a counter to all of the imagined problems with girlhood in a sexualised and consumer-culture oriented world. Oddly enough, the now former Victorian Labor government's plan for all year 9 students to attend a "boot camp" to attain life skills released about a month later seemed to share similar ideas about the potential of the outdoors to impart vital life skills. That said, engagement with a movement with a well-developed programme for young people attended weekly for several years is no doubt more successful in doing so than a potential two-week horror show of short-sheeted beds and damp clothing.
Posted by Michelle Smith at 3:52 AM No comments: