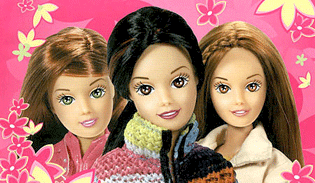 Somehow cereal lead me to Fulla. I was reading about how extruded cereals are purportedly very unhealthy (an unpublished study conducted with rats apparently showed that the creatures that ate the cereal box lived longer than those that ate the rice krispies inside), and then through the link of unhealthy foods came across a discussion of Oreo cookies. There was an ill-fated attempt to promote the cookie with an African-American "Oreo" Barbie, and finally somehow a brief update on the world of Barbie lead to my discovery of Fulla.

Fulla's occasional description as "Muslim Barbie" seems wholly inappropriate, as I can't imagine there to be an equivalent to Barbie in the Islamic world. If you mean a method of socialising girls into cultural norms, then perhaps Fulla does fulfil the same function as Barbie. Barbie's life is entwined with her boyfriend Ken's (though I never owned a Ken because it seemed a waste to get a "boring" tuxedo-clad Ken when there were more elaborately dressed Barbies to own). Her primary function is as a fashion model to be dressed and undressed in approximations of contemporary women's clothing and swimwear. On the surface of it, Barbie exists to rehearse scenes of Western dating and sexual display. While I don't have a strong knowledge of this area, clearly these aims are not central to socialisation of girls in Islamic nations.

As such, animated promotional videos of Fulla, who is described on her American site in English as "the little girl who wears modest outfits", show her inhabiting a female-centred, domestic world. In the two that were often embedded in newspaper stories in English about Fulla she is ensconced within the home. In one of these, Fulla remains in her gigantic house. She conducts her morning prayers, makes her bed, takes a phone call from her friend, fixes herself breakfast (on Fulla dinnerware, and eating what appears to be Fulla cereal- so product tie-ins transcend cultural and religious difference to some extent), welcomes her friend for a visit, whom she surprises with a cake, and then settles in to bed while looking through the happy memories in a Fulla photo album. In the other, Fulla dances around her home -which seems to occupy its own large tract of land that keeps it distant from other dwellings- magically changes outfits twice, until she is dressed in what I believe is referred to as an Abaya, which then enables her to move outdoors and pick a flower, while continuing her unstoppable dance of happiness.

Fulla's face bears quite the resemblance to Barbie's, despite the difference in eye and hair colour, and the abundance of pink and the font used to write her name also seem similar. These two videos created the perception in my mind that Fulla was entirely confined within the home, a convenient answer to problematic interactions with men in the public sphere. One more clip shows Fulla painting a picture and imagining dancing out in a field with two other girls dressed in Abayas.

Some further searching on YouTube showed that there was much more to Fulla and the range of options presented for Muslim girls than this, however, even if certain religious or cultural requirements had to be met. Like Barbie's much touted "careers" as a doctor and an astronaut, Fulla works as a dentist. You can see the dentist Fulla playset here. She rides a horse across the desert past a number of building and structures, including the Sphinx, albeit side-saddle. I'm not sure why she cries as she lays the flowers at the end of the clip, so there is something significant in there that I am not knowledgeable enough to understand. She sings, along with her sidekick dolls, in a tamer recreation of the 1980s "Barbie and the Rockers" band, though these scenes are interspersed with her reading the Koran (I think) and nurturing children. Overall the videos work against many Western norms, but other elements of Barbie culture are reinforced, such as the focus on jewellery and clothing, and references to touchstones of American culture (if not just appropriations of Barbie herself, but also Fulla clutching a Care Bear).

In another, Fulla is finally shown outside (not in a dream), riding a scooter and playing badminton with a friend. Though Fulla is often depicted with two children, I think it is clear that they are not her own children and that she is unmarried. It's consequently a little strange that we never see her parents in any of these clips, though I think Barbie's dream home is permeated by a similar uncertainty about just how she's acquired such a mansion in her own right. I did read an explanation that it would be inappropriate for Fulla to have a "boyfriend" like Ken, and as such, no male companion for Fulla would ever be manufactured. In these videos in isolation, from a cultural outsider's perspective, the absence of other people, especially men seems striking. When Fulla rides across the desert, into an amazing looking historic town, or scooters around something that looks like Munchkinland, there is not a soul to be found. At home, her female friend visits, or she cares for children. In the world at large, there are no other people, however, with the vast metropolis shown in the scooter video not offering up a single soul to invade Fulla's outdoor freedom. Is this because of restrictions on girls' free movement outside the home, or customs about their interaction with men?

There is, no doubt, much more at work to the world of Fulla than I have the ability to talk about, but I find her fascinating. I've also discovered an equivalent to Bratz dolls (Arabian Friends) and a few other attempts to combat the appeal of Barbie in Muslim countries. I might post on them separately. Some have questioned whether she is merely another ideal for girls to conform to, even if she is not parading around in swimwear and high heels. Whatever she is doing, she is certainly more successful at capturing buyers in the Middle East than previous attempts to create a modestly dressed doll rival to Barbie. Paradoxically, I think she's done it by following Western models of marketing and branding pioneered by the likes of Barbie.
Posted by Michelle Smith at 10:33 PM No comments: