The ‘death’ of J. K. Rowling: Why it doesn’t matter what she has to say about Harry Potter

Who owns a story? When an author writes a book, are the words on the page the definitive version of the plot and characters? Does what the author have to say outside the world of the book have the power to add to the meaning of the book itself?

In response to a question from a Jewish fan, J.K. Rowling recently explained on Twitter that the Harry Potter series includes a Jewish wizard, Anthony Goldstein. Goldstein’s name is recorded in an early notebook in which Rowling listed the original forty students whom she imagined attending Hogwarts School of Witchcraft and Wizardry. Within the series, however, he only appears as a minor character in the fifth and sixth novels.

Within the same Twitter question-and-answer session, Rowling also “revealed” that the school was similarly diverse in its inclusion of gay and lesbian students. She shared an image created by a Canadian LGBTQ organisation that reads, “If Harry Potter taught us anything, it’s that no one should live in a closet.”

Both Jewish and LGBTQ news sites have reported these brief comments by Rowling in positive terms. The Harry Potter series, which totals some 4,000 pages in US editions, did not give millions of readers any clear sense that Hogwarts was home to Jewish or gay and lesbian students. However, Rowling’s declarations on Twitter are not only newsworthy, but a cause for pride.

Similar feelings of celebration were evident when Rowling announced in 2007 that she had “always thought of [beloved headmaster Albus] Dumbledore as gay”. Likewise, very few people had gathered from the books themselves that Dumbledore was homosexual. Although subsequently his penchant for “plum velvet” and high-heeled boots were interpreted as clues to his sexual orientation.

With both of these announcements, some fans have also questioned whether these extra-textual announcements carry any weight. If it was not possible for readers to detect that a character was gay or Jewish then how could they possibly be considered as positive signs of increasing representation and inclusion of minority groups in popular culture?

Admittedly, there is an argument that attempts to depict a character as being of a particular race, sexuality or religion could appear tokenistic. Should Rowling, for example, have made more of Anthony Goldstein’s Jewish identity by mentioning his observance of Hanukkah, or need for kosher meals at banquets in the Hogwart’s Great Hall?

Nevertheless, depicting a character like Dumbledore as having fallen in love with a man as a matter of course could have done much to present gay and lesbian relationships as unremarkable. In an imagined world in which the supernatural is possible and the limitations of reality are few – something for which the books have been criticised by religious extremists – it speaks volumes that a gay relationship cannot be represented to the degree where it is discernable.

To figure out to what degree Rowling’s comments should influence our interpretation of the highest-selling book series in history, we can turn to a standard idea within literary criticism.

In his 1967 essay “The Death of the Author”, French literary critic and theorist Roland Barthes challenged the traditional practice of analysing literature by focusing on the motivations and biography of a work’s author. Barthes argues that looking to the author for a text’s explanation not only limits it to a single meaning, but also denies the influence of other texts (intertextuality) and the responses of the reader in producing meaning.

Indeed, Barthes famously suggests that individual readers produce their own, different interpretations of the same texts, dismantling the idea of the author as the creator of a text’s definitive meaning. As Barthes describes the process of removing the author as the explanation of a text, “the birth of the reader must be at the cost of the death of the Author”.

Barthes and Michel Foucault, among others, contributed to changes in the study of literature under the umbrella of the poststructuralist movement. Scholars abandoned the search for a work’s “true meaning” – as imparted by the author – to marshalling a variety of critical approaches relating to gender, sexuality, and class, for example, to expose the shifting meanings of a given text.

When we study literature today, we are not interested in answering what we think an author truly “meant”, but what readers understand it to mean. We examine the words within a book, their interaction with other stories in all kinds of media, and their reflection of and influence upon the world in which they have been written.

If we approach Rowling’s Twitter comments armed with Barthes, we can say that what she “always thought” of a particular character, or whether she always imagined gay and lesbian students at Hogwarts are irrelevant to how we interpret the Harry Potter series.

Though the final Potter book was published in 2007, Rowling seems eager to retain an influence on how we understand her books by revealing ostensibly new information about her characters. Whether these character points were announced to readers via Twitter or alluded to within the Potter books, however, the meanings that we as a diverse international community of readers wish to take from them trump Rowling’s intentions as an author.

This article was originally published on The Conversation. Read the original article.
Posted by Michelle Smith at 2:31 AM No comments:

Barbie for Boys? The Gendered Tyranny of the Toy Store 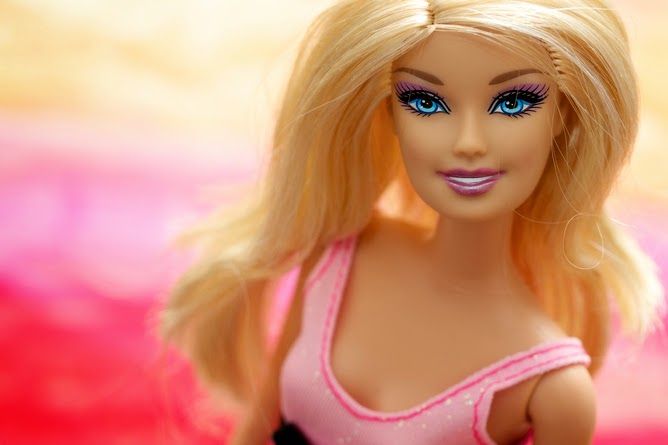 “I didn’t encourage my daughter to play with Barbie dolls and dress up in flouncy fairy costumes, but she just gravitated toward them.”

When confronted with the idea that gendered marketing and stereotypes have a substantial impact on children’s play, many parents make claims such as this that suggest that girls have an innate predisposition to acquire pink, glittery toys.

Not only do many parents deny that gender stereotypes shape what kinds of toys children feel allowed to play with, but so too does our Prime Minister. On hearing of the No Gender December campaign, which encourages people to consider what kinds of toys they are buying in the lead-up to Christmas, Tony Abbott dismissed it as “political correctness”. We must, he argued, “let boys be boys, let girls be girls”.

No Gender December, and similar campaigns such as Let Toys Be Toys, nevertheless suggest that the gender stereotyping of toys restricts children’s creativity and development. They also argue that the separation of toys for girls and boys contributes to gender inequality by marking off certain pursuits, careers, and tasks as unsuitable for one gender or the other.


Letting children “be” boys or girls implies that there is a natural set of likes and dislikes for each gender that are unaffected by the culture in which we live. Behind this view is the sense that toy preferences are rooted in biology, such that only girls are drawn toward baby dolls because they are driven to nurture, while boys will be attracted toward active toys such as guns.

There are several problems with this viewpoint. First, to take one type of toy as an example, very young boys seem equally attracted to dolls. Cordelia Fine’s Delusions of Gender refers to a study that measures young children’s reactions to dolls, finding that boys only begin to reject dolls around the age at which they can be taught that dolls are intended only for girls.


If we were able to create an environment in which limiting cultural views about gender were not presented to children through the media, advertising, or enforced by their peers or parents, then in all likelihood many boys would continue to show an interest in dolls beyond infancy, as some still do regardless of these factors. That would truly be letting “boys be boys”.

Indeed, such an attempt to counter the effects of gender segregation in toy stores is already in progress in Sweden.

In 2012, Top Toy, the franchise holder for Toys R Us in Sweden, produced a catalogue with a girl shown deftly working a Nerf gun, a small boy cradling a baby doll, and both a boy and girl playing with a doll’s house. International media reports about the catalogue reacted along predictable lines, suggesting that gendered separation of toys mirrored children’s natural preferences and that the concept of gender neutrality was bizarre and artificial.

Nevertheless, Toys R Us Sweden has only continued to move towards gender neutrality in its stores, with the physical layout being transformed such that typically masculine and feminine toys are intermingled throughout the aisles.

Second, these supposedly “natural” preferences for particular kinds of toys or colours shift according to what our culture believes appropriate for children and what the toy industry finds profitable.
We know, for example, that the “pinkification” of girls’ toys is a relatively recent phenomenon, in part motivated by a desire to improve sales by rendering the most innocuous of toys unusable by siblings of different sexes.

Similarly, where Lego was once imagined as a relatively unisex toy that encouraged creativity and developed fine motor skills, in recent years a separate line intended for girls, which involves less freedom to construct, has become a bestseller.


We place great strength in the idea that the kinds of toys that children play with helps to determine the kind of adults they will become, especially in terms of how appropriately masculine or feminine they will be. Even children know enough to act as “gender police” if a boy or girl attempts to play with a toy outside the accepted items for his or her gender.

The No Gender December campaign notes that:

Yet some of the main markers of gender inequality refuse to budge in countries including Australia. The majority of housework and childcare is still performed by women, even as more women are in paid employment than ever before. High-paying industries and senior positions within most fields remain dominated by male employees, while feminised occupations, involving caring or working with children, remain low paying.

The segregation of toy aisles is a reflection of a society in which gender inequality is normalised and children are taught to understand that the disparity between male and female social roles is inescapably natural.

While making it easier for girls who want to romp adventurously to do so and for boys who want to show an interest in clothing to play with Barbie won’t single-handedly correct gender inequality, it will help to minimise the internalising of gendered limitations during childhood. It also won’t stop girls being girls or boys being boys.

This article was originally published on The Conversation. Read the original article.
Posted by Michelle Smith at 2:05 AM No comments: