Actually, women, you do need feminism 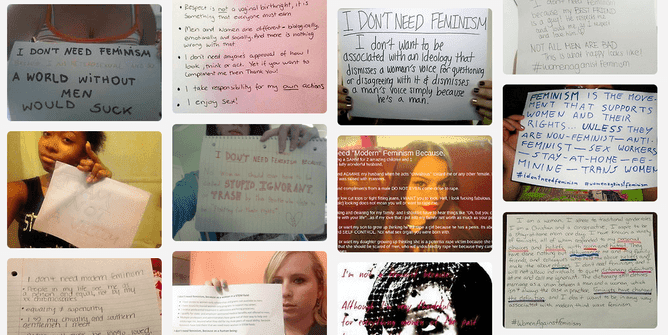 The following article was originally published at The Conversation and was republished at the Washington Post and New Statesman.

Women in lecture halls were pioneering. Yet these trailblazers couldn’t sit exams or expect to graduate with an actual degree. Newnham College for women at Cambridge University was established in 1871, but it was not until 1948 that women could hold a full Cambridge degree.

This is merely one area of discrimination that restricted what women could do with their lives. The reality of how little choice women had only a century ago is nevertheless absent in contemporary manifestations of anti-feminism, such as “Women Against Feminism”.

The phenomenon began on Tumblr, with women taking photographs of themselves holding signs that explain their reasons for opposing feminism. The site has been online since July 2013, but it’s only in the last month that it’s really started to generate heat online. Women’s statements range from claims that men are now the true victims of discrimination, to homophobic categorisations of feminists as “man-haters” and “lesbians”.

Any social justice movement with a long history and diverse adherents will exhibit contradictions and problematic ideas. However, Women Against Feminism is not only ahistorical, but fundamentally misreads the nature of feminism and the current status of women.

Let’s work through some of the common assumptions made in these anti-feminist declarations.
(1) “Men and women already have equal rights where I live.”
It is indeed true that in many Western nations women enjoy formal equality, but substantive equality remains elusive. Any of these rights also has the potential to be revoked at any time. Abortion rights, in particular, are continually challenged and overturned. We cannot simply say that feminism has done its work and that women will enjoy the rights and freedoms it has helped to achieve indefinitely.

Also, people regularly travel and migrate. Things might be better “where you live”, but what if you want to go somewhere where women aren’t allowed to drive, gain an education, or report a rape?

(2) “I was raised to be an independent woman not a victim of anything.”
Prior to feminist activism, it would have been impossible for most women to be “independent”, regardless of their parents' intentions. At various points in history, women couldn’t inherit property, work outside the home, learn to read, or even walk down the street unaccompanied. The efforts of generations of feminists helped to give women a say in government, the right to be educated, and social and sexual freedoms.

An independent woman would want to pursue any path in life that she wishes. She’s the kind of woman who would speak up when informed that her job has been made redundant because she’s pregnant, or who would get angry when told that she can’t walk home alone because otherwise she’d be inviting sexual assault. Independence and refusal to be a victim are feminist qualities.

(3) “I am an abomination to feminists” (because I am a stay-at-home mother).
Many Women Against Feminism believe that feminism opposes women’s work at home and denigrates those who don’t pursue careers. Historically, most women had no choice but to remain within the home and care for their children. Until as late as 1966, Australian women had to resign from the public service as soon as they married.

Feminism has always sought rights for women as mothers. Early Australian feminists, for example, campaigned for the government to provide an income to all mothers to recognise that parenting was the equivalent of a job and that it benefited the country. Feminism did challenge the expectation that women have no vocation of her own and be solely focused on cleaning and cooking for her family. This does not mean that feminism derides women who choose to focus on raising children and maintain a traditional division of labour. Though feminists would argue that the reverse situation, in which a male partner cares for the home and children, should be equally possible.

(4) “Men have rights too.”
As the vast majority of the world’s government and business leaders and holders of its wealth, it’s bizarre to suggest that men now lack social and political power. Women Against Feminism, however, often propose that men’s rights have been eroded because they usually have less access to their children after separation or divorce.

The continuing perception in courts and the general community that women are better suited to raise children, while men are better equipped to be in the workforce, is not a “right” that women enjoy. In dozens of ways, this belief restricts and hampers women’s rights and capacity to earn. The one drawback that affects men is the only one that anti-feminists mention.

(5) “I don’t need feminism because…”
It is impossible to extricate yourself from collective rights relating to gender, race, or sexuality. Unless you wish to withdraw from society, you will both benefit and suffer from political and social changes to what women can and cannot do. You may not want to need feminism, but you will benefit from its continued work toward maintaining basic rights and eliminating the kinds of sexism that cannot be legislated against regardless. It’s very easy for Women Against Feminism to declare that they don’t need feminism using the voice and powers that feminism made possible and which it continues to fight for.
Posted by Michelle Smith at 7:15 PM No comments: