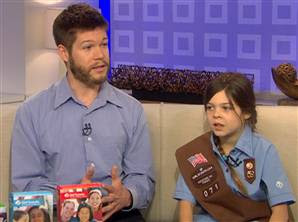 The controversy in question is one of those not particularly controversial "controversies". It's the kind that only exists within the space of the morning talk show. The Today Show in the US has featured an enterprising young Girl Scout, Wild Freeborn, who sought to sell 12,000 boxes of cookies by channeling the power of YouTube. There are two small amusements to be taken from this before we arrive at the reason why Wild was thwarted. First, the headline on MSNBC is "Her Girl Scout Cookie-Selling Scheme Crumbled" (boom tish). Second, the child's name is among the most unusual I've ever heard. Not only is she "freeborn", she's "wild" into the bargain. Perhaps there is some etymology for this name that I'm not familiar with, but how refreshing in any case that parents would wish to name their girl "wild". It's not an attribute that has ever been desirable in a daughter. Late-Victorian stories like "Wild Kathleen" were about girls who needed to be tamed.


Now the controversy is far from one because the girl's appearance on Today came complete with a representative from the Girl Scouts of America and some artfully positioned boxes of cookies on the coffee table on-set. Wild's father assisted her in producing a video to promote her cookie sales in her home town, which she personally delivered to each customer. Selling cookies online is against Girl Scout policy and thus after hundreds of sales, poor Wild was dobbed in for her rule violation. While technically Wild was not selling online, it was nonetheless close enough for the video to be pulled. Let's not tell Girl Scouts of America that I see cookies for sale on eBay all the time! I would have bought some already if not for wondering how they'd fare on the journey half way around the world.


It was a little disappointing to hear the reasoning for the cookie promotion ban from Girl Scouts of America. Their website strikes me as heavily rule-oriented, with more sub-sections on correct use of the official logo than points in the US constitution. There's no such marketing overkill evident in the British Guides. First, the spokeswoman suggested that it was necessary for the actions of the Girl Scout to fit with her programme. Lumbering cookies around door to door: builds fitness, increases risk of abduction, gets girls out in the community. Advertising cookie sales online: frightening use of internet, potential paedophiles worldwide set to converge, not part of the programme. The spokesperson claimed all girls selling door-to-door were accompanied by adults, but although Wild was protected by her father in her online activities, she could not guarantee all parents would do this, so online selling and promotion had to be forbidden.


Strangely enough, a YouTube search reveals some TV ads from Girl Scouts Nebraska encouraging cookie sales. There are a few shorter, more positive variations, but this one lays on the guilt by showing a crying little girl who fails to sell a box of cookies to an uncaring clod. I'm guessing Wild Freeborn's approach may have been more subtle and possibly more effective at motivating sales. Perhaps they could put her on the Girl Scout marketing payroll?
Posted by Michelle Smith at 5:49 AM No comments:

The nine-year-old Brazilian girl I last wrote about (was about to say "blogged" and didn't feel happy about "verbing" it- yes, I just "verbed" verb) has now had her twin embryos aborted. It is perhaps no surprise to hear that the Catholic church did not support the abortion. What is astounding is that the Brazilian regional archbishop, Jose Cardoso Sobrinho, has announced that the mother of the girl and the doctors who performed the procedure would be excommunicated from the church.

There are a couple of ironic aspects to this antiquated response. First, Cardinal Giovanni Battista Re, a Vatican cleric, has defended the Brazilian archbishop's decision with a statement affirming that "Life must always be protected." Does this mean, then, that the girl's life is irrelevant? Somehow worth less than the potential lives of the two embryos? Doctors warned that it was unlikely that the girl's small body could withstand the pregnancy. I suppose it only reflects the usual religious stance on abortion, even in cases of rape, but when the victim is a child, it makes the trivialising of the woman's/girl's life pointedly obvious.

The second is that the perpetrator of the rapes will not be excommunicated from the Catholic church. His acts of child rape are less heinous than that of the girl's mother and doctors (attempting to preserve the life of a girl who has been abused) in the church's eyes.

On International Women's Day, stories like this one are a timely reminder that the actions of men, such as those with authority in this major church, continue to have an extremely negative affect on women in developing countries. While there is a very real gender divide in countries like Australia, it is a sad thing to write that it would be something of an achievement if we could proclaim that all the women of the world were only subject to the kinds of discrimination and oppression that we are.
Posted by Michelle Smith at 1:09 AM No comments: