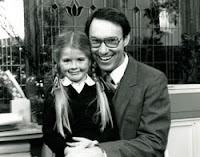 A media frenzy worthy of a Frontline episode has accompanied the recent allegations against former Hey Dad...! actor Robert Hughes. The patriarch of the Kelly family in Australia's most successful sitcom (which ran from the late-'80s to the mid-'90s) is accused of abusing his on-screen daughter played by Sara Monahan. In the ensuing circus, a number of other women who claim to have been fondled, groped and propositioned (including fellow co-star Simone Buchanan, who was only 18 at the time) have added weight to Monahan's claims of long-term abuse.

It's prompted me to reminisce about Australian TV in the '80s, and the shows of my own childhood. When I got to thinking (after marvelling at clips of "Nudge" being dubbed in German), I realised that Sarah Monahan was one of the most recognisable girls on Australian television in the '80s and '90s. While I can think of a number of American shows where girls have taken centre stage in the "family" viewing slot, like Blossom, Moesha or Hannah Montana, it's hard to think of Australian equivalents. The first show featuring Australian kids that I remember loving was The Henderson Kids (1985-1987), which was about a brother and sister forced to move to the country from the city after their mother's sudden death. Nadine Garner played one of the leading roles and Kylie Minogue appeared as a regular supporting character. After a bit of wanton YouTube viewing of old clips, I couldn't believe the "Aussie-ness" of the show, particularly the extremely broad accents of the kids. You wouldn't catch Kylie dead speaking with that kind of twang now.

I have vague recollections of being fascinated by the film BMX Bandits (which starred a young, frizzly-haired Nicole Kidman), and engaged in a conversation to that extent while at my next door neighbour's house watching afternoon TV (I can remember that it was Wombat with the puppet Agro, as it wasn't part of my preferred viewing schedule). But apart from these early memories, Sarah Monahan's role as Jenny would have to make her the most recognisable Australian girl on television of that era. There's Kate Richie growing up as Sally on Home and Away but somehow seeing her playing the part until the age of 30 on-screen destroys the mental picture of her as a perennial child.

Apart from the clear horror involved in any instance of child molestation by an adult and a co-worker, I wonder if we're not all so fascinated by these allegations because Monahan played the quintessential Australian schoolgirl of an era that now has nostalgic associations. I saw the final part of the last episode from 1994 and it actually makes a joke about "GCodes"! With a lack of other broad-accented girls to think of (well, not any longer, with Monahan's Texan strains), the character of Jenny almost sums up the idea of genuine, unaffected Australian girlhood. The realisation that her on-screen father was violating his position as an authority on the set destroys the only long-term comedy family we've ever had on Australian screens. (Not unless you find soaps like Neighbours and Home and Away unintentionally funny.)

In a reunion special from a few years ago, where Hughes was noticeably absent, actor Chris Truswell (Nudge) described Hey Dad...! as Australia's answer to The Cosby Show in that it featured a professional father, and a slightly more upper-middle class sensibility than might have been seen on our screens previously. Ultimately, it was quite a painful show to watch, far more painful than those it supposedly emulated. God knows how it became our most popular. It seems much funnier overdubbed in German, strangely. Nevertheless, if the show was meant to represent a more sophisticated Australian family, these abuse revelations also destroy the idea of safety in the middle-class family. Hughes is accused of fondling daughters of family friends and using his own daughter as somewhat of a cover to ensure his bedroom visits during sleepovers were not seen as untoward.

With his relationship with fictional girls, the real girl who played his daughter, and real girls who were family friends, now in question, the ideal television father (who cared for his family after his wife's death) has now rendered one of the most iconic- yet tedious- Australian shows of its era unwatchable.
Posted by Michelle Smith at 4:24 AM