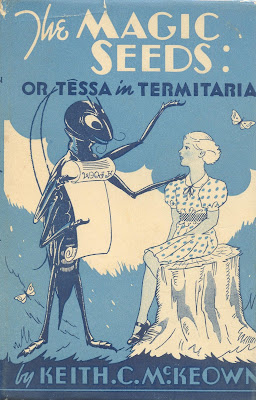 Last month I had the good fortune to attend the Rare Books Summer School at the State Library of Victoria. The sessions I attended focused on illustrated children's books from Australia and England. In the early Australian books, it was common to see attempts to impose British mythological creatures on the Australian landscape. Lots of dainty fairies skipping about among gum trees replicating the same stories from home with an exotic backdrop.

A very kind colleague of mine recently gave me a book called The Magic Seeds: Tessa in Termitaria, published in Sydney in 1940. It has lots of shades of Alice in Wonderland with its girl protagonist who wanders alone in the bush and swallows a fern-seed that makes her as small as a white ant. Excitement awaits as Tessa enters the ants' city, "Termitaria" and "learns all about their civilisation". The author, Keith C. McKeown, was an entomologist, so much factual information is jammed in, with flimsy framing devices like Gilbert the Cricket ("who knew everything") informing us of the meanings of terms like "ichthylogy" and "ornithology".

While he may have made a strange attempt at marrying didacticism and entomology by mimicking Alice in Wonderland, you can't accuse McKeown of total unoriginality. When Tessa arrives in Termitaria, the worker ants find her clothing irrisistably mouth-watering because it is made of cellulose. They promptly eat her "little dimity dress with the pink flowers" and she is rendered naked in the rest of the book's illustrations. (Well, at least until the small closing illustration when Tessa is returning home restored to her usual size.) It's quite entertaining to look through the whole book and spot the variant ways in which insects can be used to obscure naked Tessa's chest and genitalia. 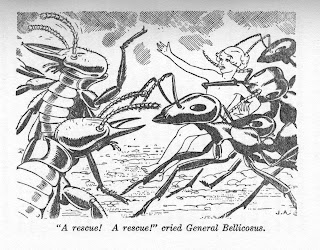 Posted by Michelle Smith at 8:08 PM

The ants know what they liked in this story.