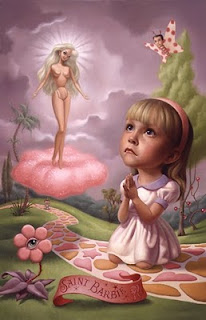 I'm a fan of Mark Ryden's surreal artwork. I have a framed limited edition lithograph of one of his works, The Magic Circus, at home. I don't know why a tiny reproduction, little bigger than a photograph, cost as much as it did, but I do know that the full-size limited edition lithographs sell for over $1,000 and are always snapped up immediately upon release.
As a casual fan, I was surprised to see that there was a pertinent artwork for this blog that had escaped my attention. 'Saint Barbie' from 1994 puts the icon of manufactured femininity in the position of a deity, and the nostalgic innocent girl (with her puffy-sleeved dress and Alice headband) as pleading worshipper. I haven't reached a conclusion about the spotted butterfly with a man's head yet (initially I took it for Barack Obama!), but it is situated above the Barbie-goddess and the girl, at the top of the visual hierarchy. The other gaze in the image is coming from the flower in the foreground, which is a recurring motif in a later Ryden work, Big Doll. 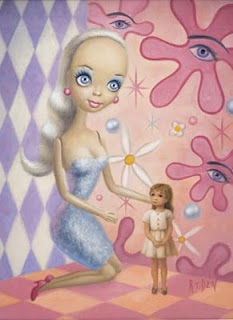 Once you see the Barbie-esque doll at full-size, she becomes grotesque, with her receding hairline, oversized head and impossibly wide eyes. The real girl, who is miniaturised, almost becomes the doll by virtue of her size, but her realistic depiction, her plain, dark eyes, her short limbs and basic dress, make it difficult to recognise her as the giant Barbie's plaything.
I suppose the presence of the eyes in both paintings could be read as the way in which the development of girls plays out under the public gaze. The sense of always being looked at, and assessed, is an inescapable part of leaving girlhood behind.

Posted by Michelle Smith at 8:25 AM

The butterfly-man is Ken, I'm almost sure.

Great idea! He's so dreamy, he can fly.