Over the Shoulder Boulder Holders.. for seven year olds 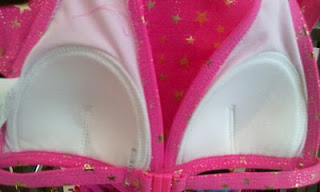 Controversy over underwear that replicates brassieres for girls too young to have any amount of protrustion from their chests is not new. In Australia in recent years, retailer Target attracted controversy for underwear sets for under-10s that included a bra-like top. Amid discussion of Bratz, Britney Spears and paedophilia, the sets were swiftly withdrawn from the racks in all stores.

The most recent incident of this ilk, which has generated international media interest, concerns UK clothing chain Primark, who were selling padded bikinis, seemingly sized for girls as young as seven. The image above shows the degree of padding, designed to counteract the fact that a triangle bikini just will not sit right on a flat pre-pubescent chest. While girls are reaching sexual maturity at a younger age in the the West- I think I had my first training bra at about age 10- and there may be a need for bras for "early developers", the adding of the padding in this instance seems to reach a new level of disturbing.

Online comments seem to gravitate toward polar extremes. The majority suggesting that such products are lures for paedophiles, and a minority of Mums and women noting that sometimes a small amount of padding in a bra can "smooth" budding nipples, causing less embarassment for girls as they are developing breasts. My negative opinion of this product is not based on fear of men at beaches being delighted by young girls leaping about in padded bikini tops, but rather on how it affects the girls themselves.

Girls and women learn to become acutely conscious of any perceived inadequacy in their appearance as feminine. There is an awkward point in a girls' life when other girls are shaving their legs and those with a soft layer of fluff still in place are the subject of mockery. We learn there are things we must do so that other girls will not tease us (the pressure women learn to apply to one another to push conformity to norms of feminine appearance) and so that boys might think us attractive (the pressure to be desirable to men and the learned satisfaction in achieving this goal). We learn that if we don't meet particular standards of desirability then there are things we can do and products we can apply, so that we do meet them, at least for as long as the make-up stays in place or the spray tan remains visible.

We also learn that there are particular body norms that are deemed attractive. Overweight women are rarely admired in popular culture, and most often the subject of derision. With porn not just a stash of old magazine or a few hidden VHS tapes, but ever-present online professionally produced movies and amateur videos (including those performed live for the viewer), the impossible sexual ideal of skinny woman with gigantic, implant-enhanced breasts travels much more widely and more frequently than ever before. Women who don't meet these usually artificial norms can feel inadequate, or not as sexually attractive. Padded bras usually serve the purpose of filling out a flatter chest, of adding extra bulk to fit an ideal. This may make some women feel more comfortable or feminine. They may feel that they now fit the ideal a little better.

Do we really need to start introducing another anxiety that women experience into the realm of pre-pubescent girlhood? Should seven- or eight-year-old girls be contemplating their lack of chest and thinking that they need a little padding to gain a more womanly silhouette? To introduce the idea that girls are not living up to another feminine ideal so early only further encourages feelings of inadequacy and poor body image that many women suffer from.
Posted by Michelle Smith at 5:33 PM