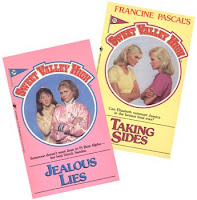 The child_lit listserv is a place of conflicting responses: awe (when Philip Pullman casually posts), appreciation (when erudite and passionate discussions transpire), and frustration (when a well-meaning member repeatedly posts topics that no one else seems to share the same enthusiasm for ad infinitum). Many times it prompts me to think about children's reading today, in ways that I don't ordinarily do as a scholar who is more up-to-date with reading habits in the 19th century than the 21st.

A recent discussion on the list concerned the segregation of books into gender-exclusive categories. As a Victorianist, I'm familiar with the idea that girls looked for adventure in the pages of boys' magazines and novels. When there was no swashbuckling or discovery of the wilds of Africa in girls' books, girl readers were able to turn to their brothers' books to experience excitement not only vicariously, but at a remove from their intended audience. There are documented boy readers of girls magazines, such as the Girl's Own Paper, but they appear to be in the minority as compared with the reverse situation of girls escaping moralistic tales.


I'm not sure today whether you'd find more girls playing football than boys being chaffeured to ballet lessons by their parents, and similarly much about children's reading seems to be directed on gendered lines that put girls' books in no-go zone for boys. One list member discussed removing a dust jacket from a book to make it appear less "girly". The boy to who read the books enjoyed it but the marketing of the book as overtly girly was seen as putting off boys who may have enjoyed a story about a girl protagonist.


While there are reasons to be sick about the "pinkifying" of girls' culture, which are well covered by the Pink Stinks campaign, it also plays a part in situating girls' books as irrelevant to boys. As list members pointed out, to suggest that white child readers could not enjoy a book about a person of colour would be largely unthinkable (even though publishers do their best to outwardly whitewash their titles), but the perception that books about girls are unappealing to boys while the reverse is not a problem continues to undermine girls' interests, strengths and abilities as inferior to typically masculine traits. Do educators have to hide the outward signs of masculinity on books in order for girls to read them?

There is a lot more thinking I need to do about the gendering of contemporary books, but as I first see it, this continued status difference begins to instill a hierarchy of feminine and masculine culture from childhood. Women's interests are frivolous. Men's important. Football and fishing shows should occupy television schedules on Saturday, a day of rest from work, but never those about typically feminine interests (apart from cooking, which nearly always involves a man showing us how it's done, unless she's scopophilic fodder like Nigella Lawson). I'd be interested to read more about the gendering of children's books over time, particularly series fiction. While it seems there is far more literature out there that does not perpetuate some kind of artificial gendered reading distinction, it still amazes me that the gendered divide is still so prominent.
Posted by Michelle Smith at 12:13 AM

Before beginning to write about 8 years ago, most of my professional life has been involved in the production of films, video programs, and TV commercials. In the film production realm, I’ve worked on and marketed dramatic films for children. What we found during those years was that boys wouldn’t watch a film if the main character was a girl, but girls were as interested in boy’s adventure and mystery stories as the boys were.

I used this experience as a template for my writing.

It's so important to draw attention to reading, and attract reluctant readers to it, especially boys. In fact, I've recently completed a feature magazine article on this subject that came out in October, "Help for Struggling, Reluctant Readers."

I grew up as a reluctant reader, in spite of the fact that my father published over 70 books. Now I write action-adventures & mysteries, especially for tween boys, that avid boy readers and girls enjoy just as much.

My blog, Books for Boys http://booksandboys.blogspot.com is dedicated to drawing attention to the importance of reading. And my new book, Lost Island Smugglers - first in the Sam Cooper Adventure Series - is coming out in June. Contracts are also signed for Captain Jack's Treasure and River Rampage.

Keep up your good work.

Max Elliot Anderson
PS. My first 7 books are going to be republished by Comfort Publishing later in 2010

What about Poh? (as in Poh's Kitchen on the ABC).

She does have someone on the side from whom she learns.