Tony Abbott's Women in White a Symbol of What's to Come 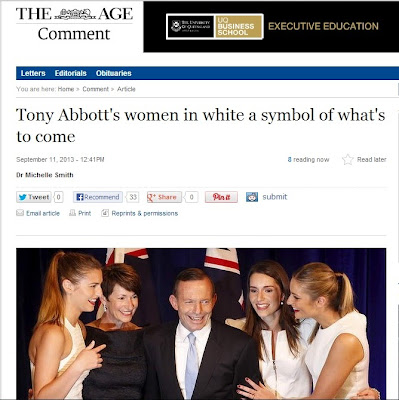 This opinion piece was published in the The Age online today.

When great political change transforms a nation, there is often a defining image that comes to symbolise it. The iconic Barack Obama “Hope” poster from the 2008 US presidential campaign, for instance, embodied the spirit of a nation that was seeking social change and to make history with its first African-American president.

One of the most striking visions during prime minister-elect Tony Abbott's acceptance speech on Saturday night was that of his three daughters, Louise, Bridget and Frances, by his side, co-ordinated in white dresses. Though the short hemlines and tight fit would be out of place at a Catholic First Communion, the connotations of religious faith and female moral purity were unmistakeable.

Abbott defined himself as the election contender with the “not bad-looking daughters” during a televised address to Big Brother housemates and championed the “sex appeal” of Fiona Scott, the Liberal candidate for Lindsay, yet the white dresses provide a far more telling indicator of what a Coalition government promises for Australian women.

Abbott is evidently proud of his daughters' good looks, but he is clearly not entirely comfortable with the idea of them having sex, infamously describing their virginity as “the most precious gift” that they could give to someone. His personal views on the undesirability of sex before marriage also invade his politics. As health minister under the Howard government, he stymied the availability of the “morning-after” pill RU486, and lamented about abortion being used as “the easy way out” for women.

Given his pronouncements on abortion, and numerous unfortunate statements over the years about women's natural abilities and their family duties, Abbott was understood to have a “woman problem”. Abbott's wife, Margie, and his daughters, became important tools during the election campaign to counter the perception fanned by Julia Gillard's impactful “misogyny speech” that he held sexist and outdated views about women.
Louise, Bridget and Frances were so prominent in the campaign that there are now several Facebook pages with tens of thousands of “likes” devoted to them. (One of which perverts Abbott's pride in his daughters' looks by purporting to encourage masturbation to their photos.)

When Abbott assessed the “sex appeal” of Scott, his response to the resulting media commentary was filtered through his daughters' perspective. The reduction of a female political candidate to her sexual desirability was merely a “daggy dad moment” that the community ought to be able to simultaneously excuse and chuckle about, like a lame joke at a family barbecue.

Men with political and economic power who do not believe in gender equality are not immune to getting married or bearing children. Being a “daggy dad” does not guarantee leadership of a government that will support women. Yet the stage-managed magazine spreads and television interviews aimed at convincing us that a man with sassy, fashionable daughters, who were not afraid to express their disagreement on issues such as same-sex marriage, could not be a problematic prime minister for women.

Posing for photo opportunities with his daughters was not the only measure Abbott took to divert attention from his past statements about women. The Coalition's generous paid parental leave scheme was an unexpected promise from a leader who had previously expressed his opposition to such a concept. The scheme also allows for fathers to take up the 26 weeks of paid leave in place of mothers, a surprisingly progressive measure.

Yet, the slick, modern look of this policy needs to be placed within the context of the Liberal Party's failure to foster women's representation within its ranks. Though the final results in several seats are not known, less than a quarter of the Coalition's members in the House of Representatives will be women. As I clicked on the current counts for each seat likely to be won by a Liberal representative, I occasionally thought I had clicked on the same seat multiple times, as similar, older white male faces continually appeared on screen.

The likely proportion of Coalition women heading to Canberra is not too dissimilar from the figures during their most recent period in opposition, in which 21 per cent of Coalition parliamentarians were women. Only two of these women were then appointed to one of the 20 places in the shadow cabinet, Julie Bishop and Sophie Mirabella. The Coalition lags behind the more equitable federal representation by women achieved by the Labor Party (42 per cent in the previous term of government) and the Greens (60 per cent).
In this way, the Coalition's key policy for appealing to women is much like the white dresses worn by Abbott's daughters, which were praised for being “modern” and “stylish” yet brought with them conservative ideas about women's purity.

The Coalition's paid parental leave scheme is a decidedly contemporary idea that will help support professional women maintain careers they have worked and studied hard to enter. Yet it is offered by a government with an extremely low proportion of female representation, headed by Abbott who holds demonstrably outmoded views about women's potential to lead. We can't let the lure of much longed-for paid parental leave distract us from the risks to the rights and welfare of women who don't wear white.
Posted by Michelle Smith at 10:21 PM