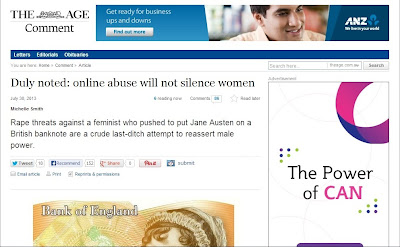 It could be because we've got more banknote real estate to spare, but since the 1990s Australia has found it easy to recognise the historic contributions of women on its currency. Of our five notes, women feature on every single one. While Queen Elizabeth II might be there by default on the five dollar note, Dame Mary Gilmore, Dame Nellie Melba, Mary Reibey and Edith Cowan proudly symbolise women's achievements in journalism, music, business and politics.

In the United Kingdom, with the reigning monarch printed on the obverse of all four circulating notes and a plethora of big names in the arts and sciences to select from, the choice of which four people to memorialise is more difficult. Just who will schoolchildren learn are among the four most important and lasting contributors to British culture?

Since the Bank of England first depicted historical figures on the reverse of its banknotes in 1970, only two women, apart from the Queen, have ever enjoyed a stint in the line-up. Florence Nightingale appeared on the £10 note from 1975 to 1994. The current series of notes includes Elizabeth Fry, noted for reforming English prisons. The other three notes represent Charles Darwin, Adam Smith and pioneers of the steam engine, Matthew Boulton and James Watt.

With Fry scheduled to be replaced by Winston Churchill from 2016, the four places that could be allocated to any eminent Briton would have been entirely occupied by men. Feminist campaigners, however, successfully lobbied the Bank of England through a Change.org petition to demand that a woman, aside from the Queen, appear on at least one note. It was a clear victory for women when the Bank of England announced on July 24 that Jane Austen would oust Darwin to become the third historical woman to appear on a banknote.

This was until the woman who spearheaded the campaign, journalist Caroline Criado-Perez, was subjected to a barrage of abuse and rape threats on Twitter in the days that followed. A polite campaign to ensure that historical women were not erased from the British currency has taken an unexpected turn and raised serious questions about Twitter's failure to provide mechanisms for reporting abusive tweets. It has also once again exposed deep antagonism and hatred towards vocal women in the public eye.

Most of the rape threats and abusive messages targeted at Criado-Perez are believed to have been sent from men. We can also presume that these men probably felt very little personal grievance about Austen being honoured. Criado-Perez herself expressed disbelief at the aggressive response to the ''tiny, tiny thing'' of lobbying for women's representation on a banknote.

What the messages directed at Criado-Perez collectively show is a desire to silence women who take a stand and who speak out. Though women ostensibly enjoy formal equality, the undercurrent of sexism bubbles up at unexpected moments like these to expose discomfort about women's progress and anger at their gall to seek further gains.

Instead of Criado-Perez facing vigorous argument and debate about her feminist campaign, she was threatened with sexual violence in an onslaught of tweets. For example, ''This Perez one just needs a good smashing up the arse and she'll be fine'' and ''Wouldn't mind tying this bitch to my stove. Hey sweetheart, give me a shout when you're ready to be put in your place.'' One man has since been arrested in Manchester in connection with the abusive tweets.

In societies in which a woman can rightfully work in any field, earn her own living, or stand for office, there are few ways to press women back into the subordinate position that they once occupied. Threats of rape, however, are a crude last-ditch attempt to reassert male power and female powerlessness.

Powerful women, as in the case of former prime minister Julia Gillard, endure obscene put-downs and rape threats as part of efforts to undermine them. While a handful of crackpots can be dismissed, the endless and prolific nature of the sexually charged verbal abuse of women like Gillard suggests a real effort to silence them.

In the same way, the abuse that Criado-Perez experienced represented a concerted, if not actively co-ordinated, attempt to bring her down from her feminist high horse. The aim of the threats was to drive Criado-Perez from Twitter and to inhibit her confidence to lobby on women's issues.

It is fitting to remember that two women who have graced Australian banknotes, Edith Cowan and Catherine Helen Spence, who appeared on the $5 note in 2001, were involved in the movement for women's suffrage. Two of the women Australia has chosen to acknowledge in this most visible of ways agitated for women's rights.

Though suffragettes, including Cowan and Spence, were subject to intense opposition from men who thought the extension of voting rights to women was preposterous, it seems unlikely that they were confronted with repeated threats of sexual assault. While women's rights may have been gained, allowing Cowan to become the first woman elected to the Australian parliament and paving the way for our first female prime minister, the ways in which women's work towards equality are opposed have regressed into despicable abuse.

In answer to the men who work to keep women silent, it would be fitting if the women of today who relentlessly fight for advancement in the face of increasingly personal, sexualised attacks are honoured on the banknotes of the future.

Posted by Michelle Smith at 6:31 PM