“The problem with the pursuit of equality is that, while admitting women to the world of men, it reinforces the idea that men’s way of organising the world is natural.” Marilyn Lake, Getting Equal: The History of Australian Feminism, 4.

In the week since Australia’s Prime Minister of three years, Julia Gillard, was deposed as Labor party leader, there has been much analysis of the role that sexism might have played in her poor poll results and subsequent overthrow by Kevin Rudd. The denials of the effects of sexism have ranged from eloquent musings on the different kinds of attacks that might be directed toward different woman in power to outright delusional claims that Gillard being a woman had no effect on the responses of the public, the media and her political colleagues.

Gillard herself felt that sexism definitely played some role in perceptions of her as the nation’s leader: “[T]he reaction to being the first female Prime Minister does not explain everything about my prime ministership, nor does it explain nothing about my prime ministership.” In her concession speech, Gillard also optimistically looked forward to a future in which “it will be easier for the next woman and the woman after that and the woman after that” to serve as Prime Minister.

With the level of bile directed at Gillard, it is hard to imagine that we will see another female Prime Minister in the next several decades, in the same way as it’s been almost a quarter of a century since Margaret Thatcher left office in Britain. The second Australian female Prime Minister is most likely still a young girl. We ought to ask ourselves what would intelligent, promising Australian girls have learned about how women leaders are treated during Gillard’s term as Prime Minister. 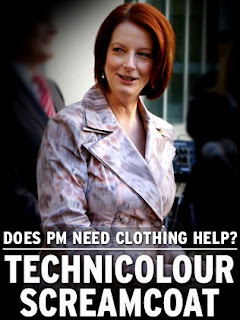 1. As a woman, how you look will override the substance of what you do.
In 2006, when Gillard was appointed as Deputy Opposition Leader, journalist Anita Quigly suggested that she 'bungled it with a less than flattering haircut and a frumpy ‘80s tapestry print jacket’. ‘Get yourself a stylist and get one fast’, Quigly urged Gillard. While the leader of the day, John Howard, had wild, unkempt eyebrows and a penchant for striding purposefully in a daggy green and gold tracksuit on his morning walks, clearly no one thought that he “bungled” his political career because of his grooming habits and lack of fashion sense.

The obsession with Gillard’s appearance ramped up once she became Prime Minister. Even Germaine Greer, the most influential Australian feminist of the past half century, expressed a dislike for Gillard’s choice in jackets, which she claimed only emphasised the leader’s 'big arse'. Gillard's new pair of fairly ordinary glasses earlier this year occupied headlines for days. 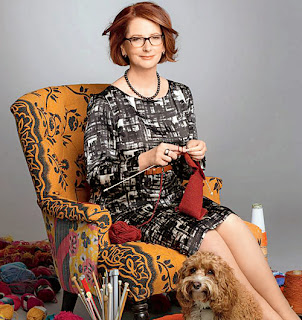 2. Activities traditionally performed by women are a waste of time and conflict with important business.
In the week before the leadership spill that ousted her, the sexist criticism of Gillard reached the heights of ridiculousness after her appearance in the Australian Women’s Weekly. Whether the decision for Gillard to pose in the act of knitting was that of her own team or that of the magazine is irrelevant to the response that the photograph elicited. We’ve seen many male leaders making feeble attempts at throwing and catching cricket balls, and we can’t forget, however we try, the sight of Tony Abbott in his extremely brief Speedos exiting the surf. These sporting activities don’t lead anyone to question men’s abilities to lead. After all, schemes like the Rhodes scholarship, of which Abbot was a recipient, seek candidates who excel at sports as well as academic pursuits.

Knitting, however, is not on that list of accomplishments. Internationally, Time magazine thought the photographs of a female leader knitting were “weird”. Locally, the attempt to show Gillard engaging in one of her long-term hobbies, and one which clearly resonated with the historical audience of a magazine like the Australian Women’s Weekly, was seen as an attempt to “soften her image” that conflicted with her calling out sexism in Parliament. The BRW  described the photos as “a jarring and perplexing interlude to the bigger gender politics of recent weeks and months”. In other words, if Gillard was trying to make a point about being a strong and competent leader, despite being a woman, she shouldn’t have showcased her interest in a typically women’s activity like knitting. The BRW also declared  that “[v]oters don’t like Gillard’s ploy to make gender a vote winner”. So by pointing out the way that sexism was making her job harder, people became disgruntled, according to the BRW, and further responded by lambasting her for her interest in a traditionally feminine skill. Many online comments referred to how much time Gillard must have “wasted” knitting or being photographed when there was the important business of running the country to attend to.

But, conflictingly,
3. If a woman is not fixated on tasks that usually fall to women, such as providing a welcoming home and raising a family, regardless of the demands of her career, then she cannot understand “normal” people.

The first suspicious evidence on this front was the photograph of Julia Gillard seated in the kitchen of her Altona home in 2005. The benches were clean and tidy, with only a few appliances visible, and the bowl on the kitchen table was empty. It did not matter that she’d just returned from overseas, having not yet even unpacked her suitcase, and that there was a potential challenge to then Labor leader Kim Beazley in the works. Gillard was clearly not preoccupied with her home and with ensuring partner Tim Mathieson ingested enough fibre because THE FRUIT BOWL WAS EMPTY! How could we trust a woman to lead the country if she couldn’t even ensure that some Pink Ladies and bananas were on hand at home?

The emptiness of Gillard’s fruit bowl was a sign of a greater emptiness in Gillard’s life. Senator Bill Heffernan infamously described her as “deliberately barren” because of her choice not to have children. His idea being that those who fail to reproduce have “no idea what life’s about” (Bulletin May 2007). And Heffernan cannot be seen as a lone dinosaur with an outdated view, as this criticism was repeated frequently. Senator George Brandis described Gillard as “very much a one-dimensional person” when commenting on her choice not be have children and her perceived inability to understand parents’ concerns (ABC Radio, Jan. 2010).

What did it matter that she was the first Australian female PM and how hard she must have worked, how much she must have sacrificed, to reach this milestone. As Janet Albrechtsen put it: “She’s never had to make room for the frustrating demands and magnificent responsibilities of caring for little babies, picking up sick children from school, raising teenagers”. Of course, if Gillard had been consumed by the demands of “caring for little babies” and “picking up sick children from school”, unlike her male political colleagues who presumably don’t perform the bulk of the childcare in their families, then it’s highly unlikely she’d ever have become Prime Minister in the first place.

4. As a powerful woman you are sexually undesirable and therefore unlikeable. You are a “bitch” and a “witch”.

Girls and women learn that being sexually attractive is vitally important. One of the worst ways to cut at a woman’s feeling of self-worth is to attack her appearance, regardless of her other skills and abilities. Labelling a woman “fat and ugly” is a way to dismiss all of her achievements and cut her down. Though Gillard is clearly not overweight and is a far more physically attractive woman than, say, Tony Abbot is an attractive man, you don’t have to look far online, or in talkback radio discussions, to find a plethora of “fat and ugly” comments.

Witches, of course, are commonly portrayed as the ultimate in female ugliness. They’re also figures who are disliked because they use magic to reverse the physical power imbalance that exists between men and women. Female witches are figures to fear because they can’t be controlled by men. The infamous “Ditch the Witch” signs in Canberra show the simplistic associations of powerful women with upending the natural gendered order and the need to denigrate the appearance of these women. 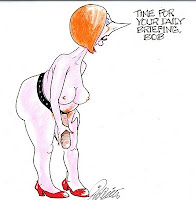 5. If you’re a powerful woman, it compromises the masculinity of the men around you.
A powerful woman like Gillard not only attracts personal derision, but those close to her are not safe either. Girls watching the treatment of Gillard would also learn that the hatred directed at her as a woman also directly affected her colleagues and partner. Gillard was asked if she had sex with Tim Mathieson and questioned on “rumours” that he is actually gay. The latter question supposedly arose because of his hairdressing profession, but at the bottom of both accusations is the idea that a masculine man could not possibly form a sexual relationship with  powerful woman. Such a thing is unnatural.

During Gillard’s term, due to the nature of the hung parliament, intricate negotiations were required with the Greens party. One of the other infamous placards displayed in Canberra alongside “Ditch the Witch” was “Bob Brown’s Bitch”. Yet offensive cartoons by Larry Pickering, including one depicting Gillard wearing an extremely large strap-on, with the caption “Time for your daily briefing, Bob”, showed that the real anxiety was not about Gillard doing the Greens’ bidding, but Gillard exerting her power over men and rendering them effeminate just like her hairdresser partner.

As the opening quotation from Marilyn Lake suggests, the pursuit of gender “equality” enabled us to get to a position where our country could boast its first female Prime Minister. Formal gender equality does not, however, change the fundamental structures and beliefs that underlie a patriarchal society. And this is why Gillard faced rampant sexism in her role as Prime Minister. And it's also why the next Australian girl with high political aspirations might be dissuaded from following a path that will lead to hatred and ridicule, but which must be borne stoicly unless she wishes to be accused of  “playing the gender card”.