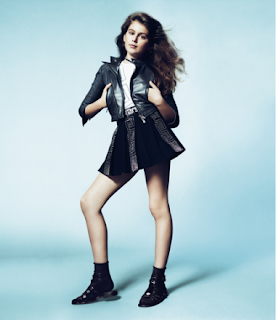 Cindy Crawford’s daughter has revived discussion about the place of girls in high-fashion modelling. Ten-year-old Kaia Gerber has been chosen as the face of Young Versace and one of the launch images, in which she has been posed in a way that recalls her mother’s supermodel shots of the ‘90s, is a world apart from fleecy-clad child models grinning cheekily in the monthly Kmart catalogue.

It beggars belief that there is a Young Versace range that caters to children from newborns to twelve-years-old. I suppose there are wealthy people out there who couldn’t be seen shopping at Target for their kids, but with the scrapes that most kids get into, and their rapid growth, it’s sinfully excessive to be spending thousands on a flimsy skirt.

Yet wealthy people frittering away money is not the most significant thing to consider about Kaia’s modelling work and the visibility of young girls in the fashion industry. Unlike Thylane Blondeau's Vogue shoot last year, in which she wore a full face of make-up, leopard-print clothing and oversize heels, there is no parody of the fashion industry in Kaia’s images. This campaign is designed to appeal both to girls and their mothers (wealthy ones at least, and to foster aspirations in everyone else), and to encourage the process of girls valuing themselves according to how they look and what they buy.

Both men and women can take pleasure in aesthetic objects and the enjoyment of wearing good quality clothing, but it is women who are judged as a result of their appearance in ways that can be crippling. We know that the appearance of female politicians is far more often a subject of discussion in the media than men’s appearance— Tony Abbott’s alarming “budgie smugglers” being the exception.

A fascinating piece by Dannielle Miller at Mama Mia shows that even when women are active in areas in which their appearance should not be relevant, it is their looks that are most often attacked as a way of dragging them down and destroying their authority. Some of the female media commentators interviewed here, and in other articles on this topic, describe extremely hateful anonymous responses, not about what the substance of their opinion, but how they look. Nina Funnell, who writes about a range of women’s issues, and who has spoken out about her own horrifically violent rape, has shamefully received abusive comments suggesting that she was not attractive enough to be raped in any case.

This is what leads me to be critical of images like that of Kaia Gerber. Some might feel that the image is sexualising and is encouraging girls to “grow up too soon”. While these things might be true as well, using a young girl to advertise high fashion in the same way as women are used to advertise products begins the process of judgement even earlier. If mature women are undermined continuously because of their appearance and struggle with the results of this, then girls, who have not yet always been able to forge a self-confident identity, will not have the resources to brush such judgements aside.

Of course, for the past hundred years or more, girls have been able look to images of adult women in the media for an understanding of how they themselves should aspire to be and other girls can serve as the fashion and beauty police to ensure conformity. It is another level of pressure and expectation to have fashionable images of girls that are clothed and stylised as women, something that a 10-year-old cannot be, even if the image of Kaia from the neck-down looks as if she is a woman. The use of teen models often sells an unobtainable ideal of youth to women. However, selling womanhood to girls will surely only foster the same kind of degradation of girls' achievements in light of their looks as women already experience.

Posted by Michelle Smith at 8:02 PM