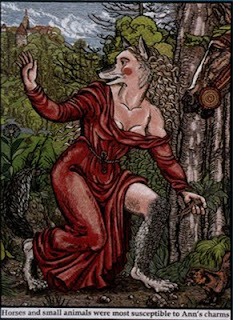 Today was the first day of the Fairy Tales Re-Imagined symposium at the Australian Centre for the Moving Image. This morning I was surprised to find a cinema full of several hundred eager participants. 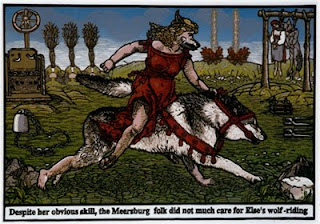 The second session focussed on the Little Red Riding Hood story, particularly wolves and the idea of devouring and being devoured. I was spellbound by the artwork and history presented by printmaker Jazmina Cininas, who undertook the Girlie Werewolf Project as part of her PhD at RMIT. Her striking images appear in this blog post.

According to Jazmina's research, there were numerous girls and women who rode wolves from the 16th century, which was a crime when practiced by females. These records flowed through to some lesser known examples of purported female werewolves, with Jazmina's own works taking much from the historical circumstances of women's imagined devious relationships with magic (for instance, imagery of particular plants and flowers, such as hemlock, associated with she-wolves and witches). It was a revelation to find girl werewolves almost five centures before the Ginger Snaps films.

The final session concentrated on the Cinderella story and its place in contemporary culture. Meredith Jones from The University of Technololgy Sydney read the tale into contemporary makeover culture, from reality television trainwrecks like The Swan to Michael Jackson and Lad Gaga. I was intrigued by the connection between Meredith's argument that makeovers foreground the process of becoming, just as fairy tales give us pleasure through the process of the heroine becoming the princess (rather than how wonderful the prince might be as a husband, the children that may issue as a result etc.). What happens during "ever after" is not important.

This session also included an absolutely fascinating and rich paper by Peter Mitchell (also from UTS) on the significance of the "light shoe" for women, to shed light on ubiquitous glass slipper. I haven't spared much thought about the evolution and importance of footwear, apart from footbinding and the repercussions of high heels on poor feet and the ability to remain upright, but I was humbled into the realisation that the history of dress has major implications for the construction of gender. I really had no idea that men also wore high heels at court, and that they did symbolise power in terms of adding height to the wearer.

Tomorrow promises sessions on the use of fairy tales in creative works and the enticingly titled "The Forbidden Room: From Bluebeard to CSI". It was suggested today that the contemporary crime drama is a modern way of confronting death in the same way as the fairy tale did in the past, so I'm keen to hear Catherine Cole's paper "Death as Entertainment". I think my enthusiasm perhaps proves the point already.
Posted by Michelle Smith at 11:23 PM