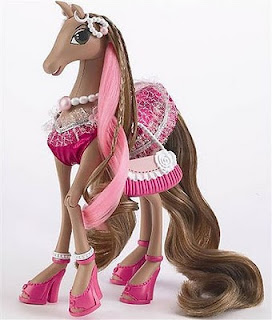 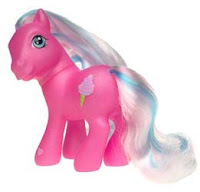 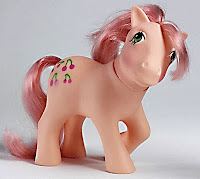 This is a chance for another materially deprived childhood recollection. I had always wanted a My Little Pony, which was quite the trend in the 1980s for girls, right up there with Cabbage Patch Kids. While it was only the outright spoiled girl who would tote more than one of those ugly dolls (the same kind who owned the Barbie Ferrari), many a girl had enough ponies to open their own horse stud. I did receive some kind of cheap imitation at one point, whose mane and tail I still brushed and combed, but my heart just wasn't in it, as it didn't have all the signs of authenticity like a cute little symbol on its rump.

I also recall a miniature explosion of outrage by a writer in Bitch magazine a few years ago, in response to the redesigned version of the Pony. The new Pony was much more sophisticated in its look compared with the shy, dumpy original. The author went as far as to say that the new My Little Pony was extremely sexualised, especially as it seemed to be "assuming the position" in the presentation of its rear end. The following edition included a number of letters from readers who accused the author of "reading too much into it"- the common accusation levelled at most people working on deconstructing children's literature.

If My Little Pony for the new millenium was debatable as to its sexualisation, there is no room for doubt with a new horse toy for girls called Struts. With their high heels and excessive jewellery, the name does leave the toy open to an unfortunate rhyme. What is perhaps most disturbing about the Struts is that they no longer only represent a horse, but seem caught midway between animal and human. It's a horse-girl hybrid, with ultra-long legs in gigantic platform heels and the impossibly large eyes of a Bratz doll. Psychologist Dale Atkins calls the Struts' eyelashes "flirtatious".

Unlike My Little Pony, which seemed tailored to the masses of girls who had fantasies of owning and grooming horses, the Struts seem more about mimicking the process of women dressing up in heels, make-up and ultra-feminine pink and lacy clothing. I am not opposed to girls dressing up or playing with make-up, but the Struts seem part of the ongoing reinforcement of girls' need to be sexual, or to learn to be sexually attractive (not just pretty), at a young age. It no longer seems like fun for a five-year-old when even a horse toy has to be sexy.
Posted by Michelle Smith at 4:48 AM