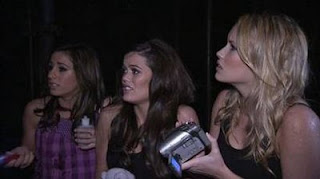 I can't imagine ever having invented the title of this blog post myself. E! television kindly stepped in with their creative wizardry to save me from having to devise my own. They've developed a new concept for a reality TV show and we're not going to need to bring in a cryptographer to decipher the premise from the title: Hot Girls in Scary Places. At least we knew there was meant to be humour in the obviousness of Snakes on a Plane.
According to The Hollywood Reporter, the pilot of the show will star "three University of Southern California cheer squad friends challenged to spend the night in a supposedly haunted abandoned hospital and compete for a $10,000 cash prize." Now I'm guessing the girls must be enrolled at the University in order to wave pom poms in celebration of males fighting over a ball, but the show's press release stresses that the girls will not be bringing any scholarly brainpower to this mental duel with the unknown: "Most who dare take on the spirit world are experienced paranormal warriors, who have prepped, studied and armed themselves for battle with the nether world. Enter the HOT GIRLS armed with the latest in scientific paranormal equipment (and the hottest new shoes.)"
I'm not exactly sure what constitutes the "latest in paranormal equipment". Has the technology really moved on that much from the ghost-sucking vacuum cleaners that the Ghostbusters used? Anyway, how interesting to see those who have previously "battled" the supernatural are coded as male ("warriors") and used the masculine weapon of reason ("prepped, studied") to do so. The unnecessarily-capitalised "HOT GIRLS" will have this unspecified "equipment" to wield, but how on earth will they know how to use it when they're going to be preoccupied with their sexy footwear?
And the show's catchphrase? "Their mission a simple one: Investigate and look Fabulous doing it." Please bring back Scooby-Doo's Velma, her thick black glasses, and that shocking orange turtleneck sweater!
Posted by Michelle Smith at 11:16 PM