American Girl Takes on the Aw-Sees 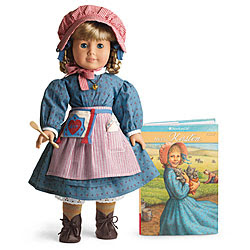 I am totally fascinated by the idea of the American Girl dolls. Not only does the range include contemporary and historical American Girl dolls, but there also accompanying books that tell the stories of each "girl" in her relevant time period. I'm sure these books do not contain literary gold, but I'm interested to see how this large and profitable company thinks historical girls should be presented to contemporary ones. I'm also guessing that real girls are more interested in the modern dolls and that it's adult crackpots like me who are interested in the likes of "Kirsten", the Minnesota frontier settler from 1854. Then again, the recent American Girl film, Kit Kittredge (starring Abigail Breslin), was set in the Great Depression in 1934.
When playing on the American Girls site (it took me several times to get a perfect score on the pop quiz, humiliatingly), I discovered it was possible to travel (virtually, and perhaps not even necessarily since I'm already here) to Australia. I loved the facts about Australia section. I had to laugh as some slang was given a pronunciation key that would have the speaker come out with the most American-sounding accent for supposedly ocker terms like "aw-see" for Aussie (more likely "oz-ee" from Strine mouths). Others replicated the British sounds that were adopted in that bizarre Simpsons-come-to-Australia episode, such as "gid-dye mite" (g'day mate). "Lolly water" was listed as the equivalent for "soda pop". I can't say I have ever heard anyone call it anything other than "soft drink" in my life. "Lolly water" has only ever arisen in the context of someone drinking a sweet alcoholic drink (in contrast to a "man's drink", like VB!), but that may reveal some now uncommon, earlier use for sweetened carbonated drinks.
The one that surprised me most was the phrase "See you in the soup!", which apparently means "See you around!" Again, I must not be getting out enough, and I'd have thought having a father who is the embodiment of the Bruce Ruxton skit from Fast Forward and Alf Stewart from Home and Away would have qualified me to know these things. I had to do a Google search to see where I was going wrong, and most of the results for the phrase were links to travel dictionaries, explaining to poor holidaymakers what funny (both ha-ha and strange) language they might encounter on their journey to the land where the water swirled down the plug-hole the "wrong" way. What has Hugh Jackman been telling them all?
Posted by Michelle Smith at 4:47 AM