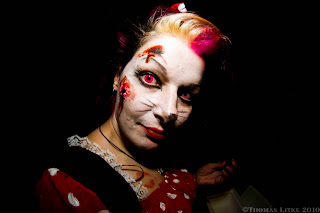 The following article was published at The Conversation on 31 October 2013.


As October inevitably draws grizzling about the premature appearance of mince pies and puddings on supermarket shelves, so too does it prompt laments about American cultural imperialism and consumerism.

Halloween is now a fixture in the Australian calendar. Spooky decorations and themed confectionery are a familiar sight in shopping centres and around 100,000 Halloween pumpkins are grown out of season for carving into Jack-o-Lanterns.

Halloween has its origins in the Gaelic festival of Samhain, which coincided with the end of the harvest season and heralded the beginning of winter. While there are many Celtic and European traditions that precede Halloween’s commercialisation in the United States—try carving a face into turnip instead of a pumpkin, as is believed to have been the practice in Ireland— its adoption in Australia has largely followed American customs absorbed from film and television.

Groups of Australian children circulate suburban streets in costume on Daylight-Savings-lit Halloween evenings “trick-or-treating”. Their quest for sweets prompted a 30 per cent increase in confectionery sales in 2012, according to a study of Halloween’s contribution to child obesity published in the Medical Journal of Australia.

Adults from Generation Y, and to a lesser extent X, are also embracing Halloween more warmly than their parents. Halloween parties and nightclub events are common.

With the growing celebration of Halloween by children and younger adults, the practice of wearing costumes has followed. If you hear knocking at your door on Halloween, you’re most likely to encounter pint-sized witches, vampires and  ghosts (the last-minute sheet with eye holes cut out).

However, in North America, and  also among the growing number of Australian adults who participate in Halloween, costumes are not necessarily tied to supernatural or “scary” characters. Costumes are just as likely to mimic iconic film and television characters, celebrities, and politicians. For instance, the most searched-for costumes this year include Miley Cyrus, Minion from Despicable Me 2, Walter White of Breaking Bad and musicians Daft Punk.

For young women, “sexy” costumes comprise a sizeable proportion of the commercially made designs available in a way that is not replicated in similarly themed costumes marketed to men.

There are “sexy” women’s versions of common costumes, including animals, pirates, devils, fairy tale characters, and military personnel. But there are also extremely objectifying women’s costumes, such as the “sexy slice of pizza”,  “sexy bucket of hot fries” and dozens of other combinations of “sexy” with types of food. By way of comparison, a male slice of pizza costume is decidedly unsexy.

There is an entire branch of racially problematic sexy costuming, notably of “geishas”, Native American, Inuit and Middle Eastern women.  The racist stereotyping across costumes for both men and women has been cleverly countered by the “We’re a Culture Not a Costume” campaign originating from students at Ohio University.

Costumes have the potential to permit  the permit the wearer to subvert ordinary social expectations. Nancy Deihl, a scholar of costume studies, points out that “Any time you’re allowed to wear a costume, you’re also allowed to engage in activities outside your normal behaviour.”

Historically, as Valerie Steele observes, women’s sexy costuming at masquerade balls from the eighteenth century onward transgressed conventional expectations of feminine propriety. Today, in the West, where girl and women are encouraged to prioritise sex appeal, sexy costumes do not readily permit the wearer to step outside the norm, but instead to remain firmly within it.

There is nothing wrong with the existence of sexy Halloween costumes for women, or with women wanting to be found attractive. (Even despite the fact that popular demands for men’s costumes rarely call for “sexiness”.)

What is problematic, however, is when the options available for women become so narrow that there is little choices to be anything else. The changing nature of girls’ Halloween costumes shows the requirement to be sexy is now transforming how girls dress up too.


In past decades, girls’ costumes were designed to recreate a particular thing or being, such as a pumpkin, cat, clown or devil. The emphasis in these same themes in modern girls’ costumes is on short dresses, stockings and even thigh-high boots that are then accessorised to faintly resemble a pumpkin, cat, clown or devil. The word “naughty” recently slipped across from the plethora of “naughty” women’s costumes to a Walmart “Naughty Leopard” costume intended for toddlers.

As Halloween gradually weaves itself into Australian culture, commercially made costumes are also finding their way on to our shop shelves. While cultural differences mean that we’re not likely to see the racism of “sexy squaw” costumes or a local equivalent gain acceptance, it is hard to imagine that the overwhelming trend of sexy women’s costumes won’t also be imported, along with the inedible pumpkins.
Posted by Michelle Smith at 6:47 PM