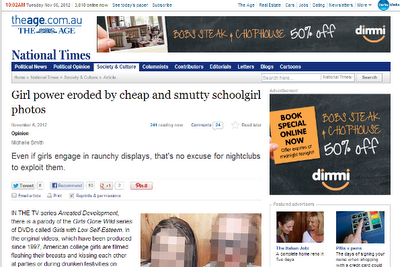 The following article was published in The Age today.

In the series Arrested Development, there is a parody of the Girls Gone Wild series of DVDs called Girls with Low Self-Esteem. In the original videos, which have been produced since 1997, American college girls are filmed flashing their breasts and kissing each other at parties or during drunken festivities on spring break.

The joke suggests that, despite all the postfeminist claims about girls exposing their bodies being ''empowering'', striving for approval from men through these kinds of performances is more likely to lower their confidence.

As another group of students concludes year 12, a series of Victorian nightclub events has begun to target graduating schoolgirls as prime candidates for raunchy display. A muck-up day event that was to be held at Universal on McCrae nightclub in Bendigo was set to include jelly wrestling matches between girls from two local schools, including a Catholic college, until media attention forced its cancellation.

The most recent nightclub event to attract controversy is the Pens Down event that was hosted at CBD nightclub Roxanne Parlour before the VCE exams began. Several girls posed for photographs in their school uniforms, with their dresses pulled open and bra-clad breasts, sometimes squished together provocatively for the camera, on display.

When these photos were uploaded to the event's Facebook page, several girls requested that the images be removed. Some were reportedly embarrassed about their sexy poses being circulated online, while others were worried because they were underage and should not have been drinking in a licensed premises.

Unbelievably, the event promoter became disgruntled with these requests by concerned girls and did not spare a thought for the potential repercussions in their personal lives or future careers. Christian Serrao responded to the girls' pleas by posting the following message on Facebook: ''I just love how these year 12s are happy to get their tits out for photos, then send threatening messages if they're not deleted off our Facebook page. Kill yourself.''

While Serrao maintains that the ''kill yourself'' line is simply an internet meme with no ill-intentioned sentiment behind it, his comments are especially ignorant in light of the suicide of 15-year-old Canadian Amanda Todd on 10 October. When Todd was an insecure 12-year-old, she flashed her breasts to a man in an internet chat room. The man captured a topless photograph of Todd and then threatened to circulate it to her friends if she did not perform a sexual show for him.

He did distribute the photo online and even went to the extreme of creating Facebook profiles displaying the topless shot as Todd enrolled in new schools to try to escape being continually shamed and bullied by her classmates. The malicious distribution of this image was integral to fuelling Todd's depression, anxiety and panic disorder and is thought to have contributed to her death.

Some people argue that girls should be free to express themselves sexually, yet it is important to remember the ramifications of topless images in the digital age, especially when girls have posed for them when they are underage. While boys and men may be eager to view such images of teenage girls and the girls may feel valued when they receive compliments in response, the photos can have detrimental consequences when distributed widely.

Twenty-six-year-old American Lindsey Boyd is suing the producers of Girls Gone Wild. She flashed her chest as a 14-year-old to two men with a camera with no knowledge that the footage would be used in the series. Her image was even used on the cover of one of its releases, College Girls Exposed, and her high school years were marred by embarrassment.

Vanessa Williams was crowned the first African-American Miss America in 1983, but was pressured to resign in 1984 when nude photos surfaced and were published in Penthouse. She had posed for the photographs as a 19-year-old photographer's assistant, but believed that the images were private and did not sign a release consenting to their use. Though Williams was awarded the title because she had a beautiful face and body, the naked images were still considered to tarnish her ability to represent the pageant.

As the Amanda Todd case shows, once an image is placed on the internet, it is infinitely reproducible.

While a jilted individual can also post sexual images of their ex-partner online without consent, there are penalties for doing so. Earlier this year, Sydney man Ravshan Usmanov was jailed for six months for posting six sexually explicit images of his ex-girlfriend to Facebook.

When photos are willingly taken in a public location like a nightclub, notions of consent and privacy may be confused. Venues that seek to capture the school-leaver market, however, should show responsibility.

Such responsibility means not only being lawful in their service of alcohol, but also in how they conduct and promote their events with respect to girls who are underage, or who have only just turned 18 and may be subject to peer pressure while under the influence of alcohol.

As girls are increasingly willing to participate in their own objectification, adults should not exploit them, especially when they are underage.
Posted by Michelle Smith at 3:13 PM