The Forgotten History of the Babysitter 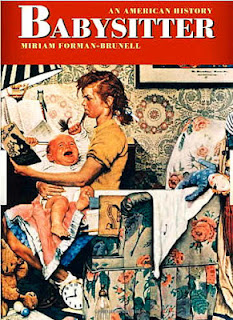 Some people think that the study of girls' literature and culture is somewhat frivolous or pointless. Others, including one grant assessor I recall, feel that researching girls reveals nothing that we don't already know from studies of women. Babysitter: An American History by Miriam Forman-Brunell (New York University Press, 2009) is a compelling counter to such ideas. It takes the topic of the teen girl as child minder and, in turn, unravels the history of girls' employment (including their formation of babysitter unions), the development of youth consumer and print culture, theories of child development, and the tension between competing discourses of sexual "threat" in the home and girls as victims of sexual harassment. The book  explores both the lives of actual girl babysitters, who contribute their own little-heard voices —often with indignation about their working conditions—cultural imaginings of the babysitter in film, television and literature.

Forman-Brunell approaches babysitting as "a cultural battleground where conflicts over girlhood—especially regarding sexual, social, cultural, and economic autonomy and empowerment—are regularly played out" (4). She shows that adults were uncomfortable with "modern" girls from as early as the 1920s, when babysitting was a only new concept. In this period, girls were redefining female adolescence, especially through their part in the burgeoning youth commodity culture by wearing make-up, reading magazines, and going to the movies, amusement parks and ice-cream parlours (often on a "double-date"). Girls' new-found independence and interest in socialising at night made the task of caring for other people's children less desirable. Babysitting therefore held little appeal to many American teens at this time. Child development experts also advised parents to be cautious about babysitters, describing these "flirtatious girls" as posing a threat to helpless children.

The Great Depression, as Forman-Brunell argues, provided financial incentive for girls to become more enthusiastic about sitting, as their own families were no longer able to provide generous allowances and constraints on employment meant that other jobs were not available. More than 750,000 high-school aged girls became "mother's helpers" or babysitters, in part, Forman-Brunell explains, because of significant cultural shifts such as the number of teenagers becoming a larger part of the overall population, the growth in high school attendance (which enabled fads to spread rapidly) and the growth of commodity youth culture.

Adults nevertheless remained suspicious of girl babysitters, at first over their contested use of the home telephone, and later over crimes such as raiding food from the refrigerator. There were also numerous urban myths of wild parties, drug use and child neglect. Forman-Brunell punctuates her history with the various ways in which this suspicion has been made manifest through fears about "bobby-soxers" in the '40s, who were scandalised for "pursuing their social and sexual pleasures" (42) and sexually unstable girls who might spread communicable diseases, as well as fictional representations of crazy, murderous vixens out to destroy happy marriages. The "disorderly babysitter" becomes a prominent figure in the 1960s when American culture "simultaneously stimulated girlhood rebellion but also stifled it" (121). While from the 1970s, the babysitter is heavily eroticised in slasher movies, including Halloween, and pornographic novels.

Throughout their history, babysitters have consistently complained about poor and unfair working conditions: adults regularly failed to provide sufficient emergency information, girls were left stranded for hours when parents did not return home at the agreed-upon time, sitters were commonly underpaid (or received no payment at all), and, in the Depression-era, girls were required to complete extensive housekeeping tasks in addition to childcare. Sylvia Plath is perhaps the most famous babysitter of the 1940s who recorded her cynicism about child minding. As a fourteen-year-old she declared that "little children are bothersome beings that have to be waited on hand and food" (56). The discontent among sitters, primarily about overwork in comparison with meagre remuneration, grew to the point where girls began to form their own babysitter unions in the Midwest and Northeast to demand fair working conditions and payment.

World War II opened up many employment opportunities for girls, not only in after-school positions, but in jobs that lured them away from school altogether. The growth in new occupations for girls, an increasing birth rate, and the movement of many families away from cities (and grandparents) to the suburbs created a chronic sitter shortage. Forman-Brunell shows how many magazines therefore presented babysitting as a patriotic duty for girls, in which a girl might "guard the home front" in a mother's absence.  Parents attempted to find their own solutions, such as sitter exchanges or co-ops where groups of parents would take it in turns to mind each other's children. Inevitably, some parents did not pull their own weight and these co-ops failed to provide the answer to the sitter shortage.

An unexpected aspect of the history of babysitting in America is the cultural support for boy sitters, who were viewed as more reliable and authoritative than their female counterparts. During the Depression, the scepticism about girl babysitters contributed to the popularity of hiring boys to mind children and, similarly, during World War II, the sitter shortage meant that boys actively pursued jobs as child minders. Male college students even formed their own babysitting services, such as Princeton's "Tiger Tot Tending Agency". Male sitters also answered fears about the feminisation of boys while their fathers were busy working 50-hour-weeks: "boy sitters could pry loose the 'skirt-clinger,' and by playing 'rough-and-tumble' games outdoors, instill the manly hardiness experts anxiously promoted" (107).

The latter part of the book concentrates on the increasing popular cultural representation of the babysitter from the 1970s and offers some intriguing insights into how this figure comes to be blamed for the destruction of the domestic ideal (especially by maniac male stalkers). For girls themselves, however, series such as the Baby-sitter's Club, which began in 1986 with Kristy's Great Idea, promoted sitting as a means to a career and a demonstration girls' competency. The books also presented sitting as an enterprise among a confident sisterhood of friends, well in advance of the concept of "Girl Power". Forman-Brunell argues that the cultural construction of the "Super Sitter", which the Baby-sitter's club espoused, "appropriated feminist ideologies but neutralized empowerment so that girls would not become too powerful" (177).

Babysitter: An American History necessarily charts the "fall" of babysitting, as girls became more preoccupied with after-school activities and part-time work in malls than minding children in private homes. While girls have always shown some reticence about sacrificing their social life during their teens, Forman-Brunell includes the perspectives of girl sitters that show that discontent with parents sometimes turns girls away from sitting. This history uses the practice of babysitting as a focal point for mapping changes in girls' education, employment and popular culture across the past 90 years. While babysitting may be a less popular form of employment among American teen girls today, the cultural resonance of the babysitter, however, lingers on, as both a trope of forbidden teen sexuality in pornography and a potential threat to children themselves in the horror genre.

Posted by Michelle Smith at 8:48 PM

Thanks, Michelle, for this informative review.

I haven't read the book, but do you think it adequately considers questions of race and class? For example, the comment 'The Great Depression... provided financial incentive for girls to become more enthusiastic about sitting, as their own families were no longer able to provide generous allowances' seems to suggest that the book is pretty middle-class centric (who else would have generous allowances for their daughters?!)

It would be interesting to know if other classes and ethnicities have also participated in babysitting.

Elizabeth, thanks for your comment. This is an excellent question. Race and class are very much absent from the book's discussion, as babysitting by teen girls seems like quite a white-bread, middle-class pursuit, especially in the early 20th century. Working-class parents may not have had the funds to hire babysitters to enable leisure time and middle-class families no doubt wanted to hire girls from their own neighbourhood.

That said, there must have been child care going on in poorer households and in the houses of non-white families, and, as you say, it would be interesting to learn about their histories. So, yes, there is a telling absence here. I wonder if this is partly the result of the greater historical record of anxieties about white, middle-class girls and what they got up to? And perhaps other groups retained their family networks for childcare to a greater degree, unlike the middle-class families who traded the cities for the suburbs?

Good points. I have nothing to base this on, but I suspect girls were more likely to sit free of charge in other groups - as you say, this could be due to tighter family networks but also perhaps due to different expectations about the role of young women in providing care for younger siblings or cousins etc.

That's a good theory. There might have been greater familial expectation, as you say, and a more traditional idea of childcare as a duty rather than work that required payment.