Why Bert and Ernie Should Come out of Sesame Street's Closet 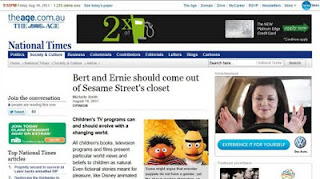 I had an article published in The Age and Sydney Morning Herald newspapers today responding to the debate that has ensued about Lair Scott's petition for Bert and Ernie to get married on Sesame Street. While almost 10,000 people have signed the petition to date, the very concept of gay characters on a children's TV show has sparked tens of thousands more to express their opposition to the idea of "inserting sexuality" into children's viewing time. Even some gay commentators think the whole concept is misguided.

Nevertheless, I thought the reactions that this little petition provoked were a good chance to think about why the representation of gays and lesbians in children's books and television is still considered so problematic.
Posted by Michelle Smith at 5:04 AM

I think people get mixed up for some reason - representing a married couple, whether gay or straight, doesn't necessarily involve representing explicit sexual material! Just people building a life together. And that is Bert and Ernie!