The Lack of Cheer in Cheerleading 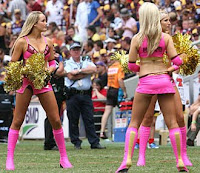 There's no doubt that US cultural influences formed the bulk of my childhood entertainment. My family rarely watched Australian public broadcaster ABC, with its mix of documentaries, British dramas and newscasts that were delivered in what we (being a family in which no one had yet completed high school) perceived as "snobby" accents, but which I now recognise as the mark of education and travel. Heaven forbid someone had actually lived in another country for a year or two: we never even travelled interstate!

What I could access through our small-screen television became a cultural junk food diet of sitcoms, teen films and "dramas" such as Beverly Hills 90210. With a predominantly American intake of films and television, the figure of the cheerleader was an easily digestible sign of successful femininity. She stood in contrast to bookish and unattractive girls. Not only was the cheerleader good looking, she was athletic, popular and considered successful, but in a way that supported men, rather than overshadowing their sporting "achievements". Recent films such as Bring it On emphasise the backstabbing and bitchiness inherent in any all-female competition, and also its sexualised nature as one tag-line proves: "A Comedy About The Crazy Things Girls Do To Be On Top."

I remember an older high-school girl who travelled on my school bus. She had become a cheerleader for a new Australian Rules football team that had been established on the Gold Coast. I stared at her spiral-permed hair, heavy Cover Girl pancake makeup (masking a reasonable dose of acne) and the pom poms that she once carried on the bus in awe. She was the living embodiment of everything that I had seen via American culture. She was the peak of what a girl could achieve within that realm of thinking. Several years later, I saw her at a fleamarket stall with her friends, clearing out belongings they no longer wanted or needed, and the pom-poms were among the items for sale. I knew that I could not simply buy them and transmogrify into a cheerleader. It would take a certain type and look of girl to become one, and even possession of the coveted bunches of plastic were not going to make it happen.
These reflections were sparked by the suggestion that the National Rugby League should ban cheerleaders from its games due to numerous recent controversies relating to a sexual assault and the omnipresent objectification of women. How could football players be asked to treat women respectfully- to not abuse their position and status as the ultimate Australian male- when the very system of football itself placed women on the sidelines as entertainment based on their physical attractiveness for the enjoyment of male spectators? General opinion on discussion forums did not seem to locate a connection between women treated as entertainment (it's just for fun!) and situations that spiral out of control like the 19-year-old woman who consented to sex with two football players and wound up in a room with five times more men masturbating and rubbing their genitals in her face.
Researcher Catherine Lumby said that the problem did not lie with the cheerleaders: "I take a strong view that how women are dressed has nothing to do with it. I refuse to condemn women for cheerleading or for dancing as ballerinas in skimpy tutus for that matter." Of course, she is right that the mere presence of a scantily clad woman does not authorise sexual assault (witness a Brisbane man this week claiming he raped his 14-year-old stepdaughter because she wore shirt skirts) or even Neanderthal attitudes to women in general. The Minister for the Status of Women, Tanya Plibersek, put her suggestion for the NRL to change to alternative forms of pre-match entertainment (such as drummers) in terms of needing to please mothers to ensure that the the NRL appealed to "the next generation of football fans". So, in short, the only reason you might want to remove the barely-clad women from the football field on a winter's evening is because mothers might be upset and not want to encourage their sons to participate further in the sport. We wouldn't want to try something else for the simple reason that many women might not like or enjoy it, full stop.
The only serious calls I have seen for the banning of cheerleading are in India, where its recently developed IPL cricket series has brought Americanised cheerleading to a different cultural context. There are other faint murmurs about overly-sexualised routines in other parts of the world needing to be toned down. I'd like to hear more about how women could be recognised publicly as more than than celebrators of male achievement. It's not simply about sexualisation, but creating heroes of men and ornaments of women. So long as a school girl on a bus like my eight-year-old self might see a cheerleader as a successful woman, there is a problem with all-female cheerleaders at football matches. And the masculine terrain of football is just the place that needs to break down stereotypes about women as mere accessories to successful men.
Posted by Michelle Smith at 12:09 AM