16-year-old girl to sail around the world 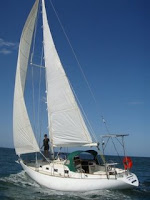 While almost anyone who can walk, abandon work for months and pay for the substantial expenses can set out to climb the world's largest mountain, not as many are able to circumnavigate the globe unassisted in a sailboat. Australian Kay Cottee became the first woman to do so in 1988. Ten years later, Jesse Martin set sail at seventeen years of age and completed his journey by the age of eighteen to become the youngest person to do so. His adventures prompted a book entitled "Lionheart", no doubt with reference to the courage and mental strength required to survive in isolation for almost a year on the sea, as well as being the name of his craft (well, minus the sponsors, Mistral who he also had to name the boat after).

With women and boys having achieved this feat, it only remains for a girl to take on the unforgiving seas. The girl who is very likely to be the one to have her name entered in the Guinness Book of Records is called Jessica Watson, and she's recently announced her intention to work towards her attempt to sail around the world non-stop without any help. Jessica has her own blog and website. As a sign of how series this attempt will be, her parents have quit their jobs in order to prepare for it. Jessica plans to begin the attempt in September, shortly after her sixteenth birthday which she celebrated this month and which finally rendered her eligible to obtain a boat license. If she completes her journey as scheduled, she'll shave a year off Jesse Martin's record and will have circled the globe by the age of seventeen.

According to a newspaper article, some have criticised Jessica's planned journey because she is too young and the trip will be dangerous. Jesse Martin was only seventeen when he began his journey, but I don't recall public concerns about him being too immature to deal with the risks. In fact, Martin has gone on to be championed as an exemplary human being by everyone from the United Nations Director to the Prime Minister and even musician Ben Harper. Bill Clinton remarked that Jesse's "courage and determination are an inspirational example".

Clearly we're not looking for these same attributes in girls, as they must be protected rather than courting danger at sea. Good luck to Jessica! I'm sure they'll be grooming a boy in utero to break her record the moment it's set.
Posted by Michelle Smith at 7:52 PM