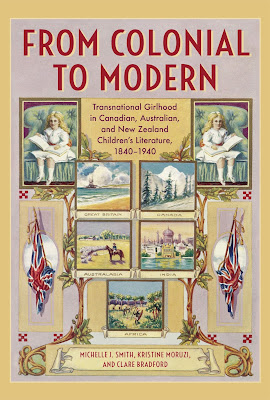 My new co-authored book is now available from University of Toronto Press. It's been many years in the making with two wonderful colleagues, Kristine Moruzi and Clare Bradford (Deakin University), and focuses on dozens of novels and magazines from colonial Australia, Canada and New Zealand that have been largely excluded from studies of children's and national literatures to date.

Print culture was central to the definition, and redefinition, of colonial girlhood during this period of rapid change. Models of girlhood are shared between settler colonies and contain many similar attitudes towards family, the natural world, education, employment, modernity, and race, yet, as the authors argue, these texts also reveal different attitudes that emerged out of distinct colonial experiences. Unlike the imperial model representing the British ideal, the transnational girl is an adaptation of British imperial femininity and holds, for example, a unique perception of Indigenous culture and imperialism. Drawing on fiction, girls’ magazines, and school magazine, the authors shine a light on neglected corners of the literary histories of these three nations and strengthen our knowledge of femininity in white settler colonies.
Posted by Michelle Smith at 10:46 PM