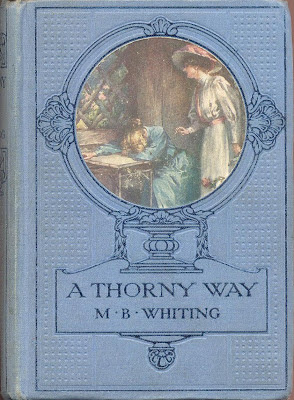 Part of the difficulty of working on historical books for young people is that much of the basic information that you can readily find for adult literature has not yet been compiled. Though there are some excellent bibliographies of Australian children's literature, it's still not that simple to locate everything that is out there, nor much reliable biographical material about the authors themselves.

Kerry M. White lists Mary Bradford Whiting among lesser-known Australian authors of girls' family stories, yet I can't find much about her that indicates that she lived in Australia at any point. A Thorny Way was published by Thomas Nelson and Sons in London, and it was not an uncommon route for Australian children's writers to publish via an English publisher. What I can find suggests that Bradford Whiting predominantly wrote religious publications for the Christian Knowledge Society and Religious Tract Society.
We cannot accuse her of not embrac 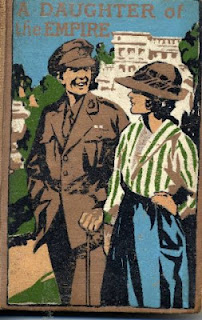 ing diversity as, in addition to her foray into girls' books, she also published a book on Dante with Cambridge and wrote Shakespeare criticism in the Gentlemen's Magazine. Some of these publishing avenues suggest that she had nothing to do with Australia whatsoever. Yet Austlit shows that she published several children's books set in Australia, including Peggy and Pat: A Tale of the Australian Bush (1931), Josee: An Australian Story (192-) and Wallaby Hill (189-). And let us not forget A Daughter of the Empire (1919), which looks like a must-read.
Sadly for me, it seems A Thorny Way is set in England, so I will join the heroine in casting my head down on the desk in despair.
Posted by Michelle Smith at 9:34 PM