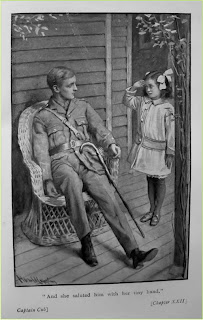 When we think of the things that we wish to shield children from, war has to be one of the most concealed topics, right up there with sex. While many boys, in particular, may revel in playing war-based games on computers and in reality, the actual substance of war is something that parents fret about. Especially after 9/11, which was the catalyst for the ongoing "war on terror", there was frequent discussion on talk shows about how to explain or conceal the situation from children, who may be frightened by a world in which people wish to kill others mercilessly.

Yet there is no ability to entirely conceal the reality from children who are located in places of conflict. While most of these war zones today are not within view of children in the West, children in the United Kingdom, the United States, Canada, Australia and other countries were once very much aware of and encouraged to participate in war. If we look to World War One, children's books, magazines and organisations across the British Empire were saturated with the influence of war in a way that did not seek to conceal its horrors, but to use them to bolster children's ideological and practical participation in the war effort.
Last week I attended 'A Game that Calls up Love and Hatred Both: The Child, the First World War and the Global South', a symposium that forms part of a major research project, 'Approaching War: Childhood, Culture and the First World War', involving scholars in Canada, the United States, the United Kingdom and Australia.

I co-wrote a paper with my colleague Kristine Moruzi on the war-time trilogies of Ethel Turner and Mary Grant Bruce. The illustration above is from Turner's novel Captain Cub and shows the kind of universal admiration for boys and young men who voluntarily enlisted in the war present in texts for young people at the time. We set our discussion of the novels against the Victorian School Paper, which was a monthly magazine that all children in the state were required to purchase and read from the late nineteenth century. 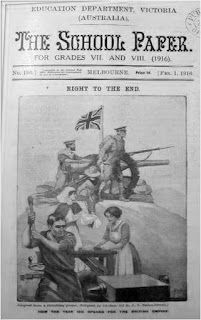 The cover from the February 1916 edition shows not only the way in which the war and Australia's necessary contribution to it where placed at the forefront of children's educational materials, but also how a role was figured for all kinds of people, including women as nurses and maintainers of the home front. It was important to generate a sense that all Australians were contributing to the war effort, even if children could only sacrifice treats and trips to the movies to contribute small amounts of money to various Education Department sanctioned appeals.

Other papers at the symposium showed just how diverse the contributions encouraged from children during World War One were. Branden Little from Weber State University spoke about the Junior Red Cross in the United States, which was so successfully promoted that eleven million American children enrolled during the War. The children not only made and gathered supplies for war victims and hospitals, but worked in 'Victory Gardens' to contribute to the food supply and raised funds to assist Red Cross efforts overseas. (The Junior Red Cross raised almost four million dollars at the time, which constituted 10 per cent of the total of Red Cross funds in the period).

While the Junior Red Cross proved popular with both boys and girls, there were also numerous organisations targetted specifically at each sex that supported particular war-time roles for each gender. The Girl Guides were a standout in this regard, with an international network of girls already in place across the Empire, which Mary Claire Martin from the University of Greenwich discussed. Though in places such as Australia, where Guiding was still establishing itself, the organisation did devolve somewhat into the Junior Red Cross, those groups of girls who did remain as Guides set about working to raise funds for the war effort. Girl Guide training at the time was very much concerned with nursing, and girls supplemented their community work with practice in bandaging the wounded and carrying imagined victims on stretchers to safety. 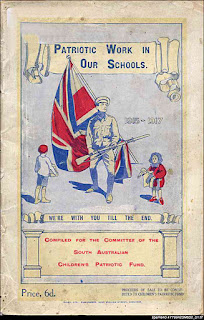 epf from the University of New England spoke about the South Australian Children's Patriotic Fund, which, like the Junior Red Cross and the Girl Guides, actually raised quite a substantial amount for the war effort. What was particularly striking, apart from the quirky beauty of some of the events organised by the Fund, such as an Alice in Wonderland themed fair complete with giant mushroom, was the immersion of entire country towns in the war. When the Children's Patriotic Fund held an event or parade, people came from miles to support it. Whether their motivation was strictly related to the war or not, I can't say, but war certainly permeated community life. During talks from representatives from the Australian War Memorial and National Library we heard excerpts of songs sung by young girls who would situate themselves outside the prime location of the town pub to raise funds for the war.

As papers by Kim Reynolds (University of Newcastle-upon-Tyne) and Jessica Gerrard (UTS) on pacifist movements for children, including socialist Sunday schools, noted, however, there were voices who opposed the war and sought to send children a different message to the mass of war-time propaganda. Nevertheless, their papers largely related to the UK, so how much these alternate voices permeated Australian culture during the war remains uncertain.

What seemed to come out across the papers was the sense of duty associated with the war. It is hard to conceive of children having any sense of nationhood beyond sporting events today and the concept of owing a duty to that nation seems so far removed from the ideas circulated during World War One that encouraged every child to "do their bit". Obviously, Australia is not as fixated on its relationship with Britain today, and we see war in a different light after the horrors of both world wars, Vietnam and endless fighting in the Middle East. So, in one way, the distancing of children from our involvement in war partially reflects our changing idea of conflict and greater reluctance to participate. But, also, we can see a sharp change in childhood expectations and the dissipation of the idea that children need to be part of important social changes and causes. While people do suggest that children are "losing their innocence" in the internet age, when it comes to war, children in the West are definitely more oblivious and shielded than they were a century ago.
Posted by Michelle Smith at 4:47 PM

Thank you soooo much for this information ! ^^