At the moment I'm preoccupied with colonial girls, or at least I should be. I'm currently reading some novels published by Ethel Turner and Mary Grant Bruce for an upcoming conference, 'A Game That Calls Up Love and Hatred Both', about childhood and World War I. On a related note, I've been trying to think about why Australia does not have an equivalent of Little Women, Anne of Green Gables or The Secret Garden. There are not really any Australian girls' books from the late nineteenth and early twentieth centuries that have achieved "classic" status, or which even remain in print. My Brilliant Career, perhaps, but it is not really read by today's girls in way that these canonical American, Canadian and English novels might be. 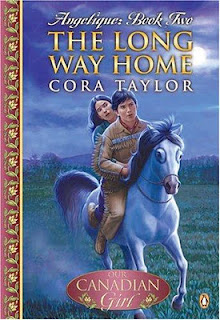 What today's Australian girls might read is a new series from Penguin, 'Our Australian Girl', which assembles a range of authors to imagine the lives of historical girls. Five years ago, an equivalent series, 'Our Canadian Girl', began publication in Canada, following the 'Dear Canada' series by Scholastic in 2001 for older readers. (Let us not even ponder the significance of the girls' series title evoking the idea of girls writing a letter to their nation, while the 2010 series for boys is titled 'I Am Canada'.). All of these books perhaps owe something to the success of American Girl merchandise. In 1986, the blandly named Pleasant Company began manufacturing dolls inspired by historical events, and in the ensuing decades, the cross-media franchise, which includes multiple books depicting the life of each historical doll, has become a phenomenon (albeit one in which the historical aspect has been somewhat subsumed by 'My American Girl' dolls that are contemporary in their dress and stories).

Both the Australian and Canadian series are aimed at girls from 8-11 and seek to bring "history to life". To support its take-up in schools, both series are supported by teachers' guides. For the Australian series, these classroom guides were prepared by Dr Pam Macintyre in the Education Faculty at my own university. The academic seal of approval and connection with "real" aspects of history were obviously important to Penguin.

Marnina Gonick has already researched the Canadian series and its representation of Canadian national identity, especially how the historical girl is used to consider contemporary questions of gender and nationality. (Her paper on this topic will hopefully be part of the Girls, Texts, Cultures anthology being edited by Mavis Reimer and Clare Bradford for Wilfrid Laurier University Press.) I am keen to find out how the Australian equivalent represents colonial girls in comparison with their representation in colonial books- though I'll need a cool $250 to buy all the books to date.

While Scholastic has published My Australian Story since 2000 (with a similar connection to the classroom and some high-profile children's authors), Our Australian Girl seems to be the first gender-based historical series of this type to appear in Australia. I first saw it in a bookstore in a large purpose-built display with all four volumes of each characters' story available. The cover artwork is very appealing, and avoids the obvious "this is a book intended to teach me something" look of the Scholastic titles, especially its use of a different charm bracelet motif on each of the characters' titles. The Grace books are about a London orphan who is transported to Australia in 1808 for stealing apples; the Letty books about a free settler who travels to Australia with her sister in 1841; the Poppy books about a girl with Indigenous and Chinese heritage living in a mission during the goldrush in the 1860s; and the Rose books are situated in the early 20th century and focus on the restrictions on girls and women (brought to a head by Rose's suffragette Aunt moving in with the family in Melbourne).

The series website encourages girls to document their own stories of becoming an Australian girl, to fashion their own book cover and learn to do activities enjoyed by the characters (including drawing horses and baking damper). The site recently held a competition where girl readers were invited to describe the kinds of charm they'd like to put on their own charm bracelet. The winning entry is not too far from the kinds of aspirations to be found in girls' magazines of a century ago, including to travel, care for animals, take care of babies and to knit and make things (with an aspiration toward lace making).

Like The Daring Book for Girls there could be an element of parental and grandparental nostalgia here hoping to inculcate old-fashioned values about femininity. Though there's still an element of heroism in the extracts published on the site, with Grace unperturbed when attacked by rats and lice while shackled to the convict ship, the initial signs are that these contemporary versions of colonial Australian girls might just be a little less adventurous than those in the stories real colonial girls read.
Posted by Michelle Smith at 2:13 AM