Child Beauty Pageants Down Under 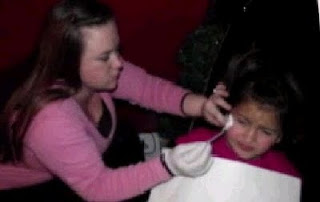 I had an article published in The Age yesterday about the ways in which women are judged on their appearance. I aimed to connect two superficially unrelated things, SlutWalks and the upcoming protests about American-style child beauty pageants arriving in Australia.

After I'd finished the initial draft of the piece, an item kept popping up on the news about a woman in the United States who had apparently injected her 8-year-old daughter with Botox. It seemed like a perfect, though rare, example of actual physical abuse related to pageants, like the videos that had been circulating of a woman waxing her young daughter's eyebrows for a pageant.

The next development reported on Good Morning America was that the girl's mother, "Kerry Campbell", was being investigated for cruel treatment of her daughter, Britney, and that the child had been removed from the family home. Recalling such fame-seeking lows as the "balloon boy" hoax, "Kerry" is actually Sheena Upton, a woman who claims not to know what Botox is.

The revised story has it that Sheena was paid by the tabloid The Sun to fabricate her tale of taking to her daughter's "wrinkles" with Botox. For what ended up being a fairly extensive media blitz, she received a paltry $200 from the paper, but I believe far more from the television programs who eagerly interviewed her, curious to speak with a mother who caused pain to her daughter in the pursuit of beauty.

In response, Jezebel suggests that our instincts should have told us that no mother would really have hurt her child in this way. It should, perhaps, have been obvious that this was a hoax. If it is the case that The Sun has a recent history of fabricating other stories along these lines, I wonder why this is. What kind of popular desire are these invented tall-tales about syringe-wielding mothers filling?

Though the landscape changes with this particular story with each day, making it hard to attempt any kind of analysis, it seems much like we want to believe that pageant mothers will go to any lengths to have their daughters be recognised as winners. The Sun, which is alleged to have staged the hoax, is a British tabloid. Perhaps both Britons and Australians are eager for stories that provide support to their scepticism about American-style child beauty pageants and fabricated stories like this are seen to meet a desire to tar pageant mothers as so competitive that there is no line that they will not cross?

It does not seem too far-fetched to imagine that if a mother is willing to spend thousands of dollars on a pageant dress, insert false teeth into her daughter's mouth, wax her legs, have her photos retouched and perhaps most offensively of all, have her learn a song like "Cutie Patootie" that she might go one step further and inject her with Botox. It seems patently ridiculous that an 8-year-old would have any discernible "wrinkles" to speak of, but so many other standard elements of American beauty pageants for girls seem similarly unthinkable to me that it is indeed hard to know when you're being taken for a ride.
Posted by Michelle Smith at 4:42 AM

Pity you didn't mention "'Little Miss Sunshine' in your article. This film takes a very penetrating point of view of girl beauty contests, but it it so laced with humour that my wife and I had a hilarious time.
Get it out of of the video store or somewhere and enjoy it.
It is a simple biological fact that men are stimulated by certain dressing by women and the latter have to keep it to a level to elicit admiration, not raise lust.
Some of the cleavage around in the streets these days is downright embarrassing.