What to do with Enid? Blyton books in the twenty-first century 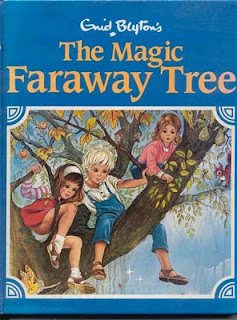 It is not a mark of honour to be an uncritical, unabashed Disney fan in the world of the academic study of children's literature. The "magic" of Disney is tainted once you wake to the films' gender, race and class politics. It is still acceptable to inexplicably, and guiltily, want to visit Disneyland, however (as I have done in Los Angeles and Paris). Enid Blyton occupies a slightly lesser-known rung in the world of children's texts, but seems to provoke a similar polarity between loving adoration and total hatred.

They do let children off from most crimes (well, except for the James Bulger killers, but that was murder), so you must not record a conviction for this, but my first book love was directed at Enid Blyton's Faraway Tree and Wishing Chair series. Oddly, or perhaps "queerly" as Blyton would have said, many of my students at Deakin University, when asked their favourite children's book, often mention one of Blyton's books. I was surprised that her books were still a fixture of childhood reading.

I'm not sure how much of a part the illustrations played in my enjoyment of the books. The editions I collected were the large format, hardcover, lavishly illustrated ones like the one shown in this post. I used to draw versions of the pictures for school projects. At a certain age, I believed that it was entirely possible for there to be a magic tree at the top of which different "lands" materialised each week, many of which seemed to culminate in an unending buffet of desserts with obligatory treacle puddings prior to departure. In grade one, a girl at my primary school told me that the Faraway Tree was actually situated at the end of her street. This was in Frankston, Victoria, which meant it was perhaps not too dissimilar from someone claiming that a circle of fairy folk sat at the back of their trailer park behind an old car body. If the folk of the Faraway Tree were going to choose somewhere, it would probably not be in Frankston, but a suitably English glade or perhaps a European forest in which red and white spotted toadstools grow. But I believed her. And I was very jealous.

And so, it's time for another outraged response to modernising Blyton's prose for new editions of the Famous Five novels. I remember a similar outcry several years ago when two of the protagonists of the Faraway books, Fanny and cousin Dick, were relieved of their genitalia-connoting names to be renamed Frannie and Rick. We sniggered about those names in 1986. Did it take another 20 years for publishers to catch on to this?

I feel a bit ambivalent about these changes. On the one hand, children's texts are products of their time, and historical children's literature often makes for uncomfortable reading for adults, even scholars. I wouldn't like to put one of Angela Brazil's novels in which characters sing a "coon song" into the hands of a child. And yet similar ideologies sometimes inform E. Nesbit's books, yet they still seem to get the nostalgic seal of approval. If we accept that children's books help socialise children into our world, then if a child reads a book in which girls do all the cooking, boys take care of the important work and "dirty gypsies" spew forth hordes of children and try to steal babies (cue E. Nesbit) then they won't be exposed to ideas we agree with.

Which brings me to the other hand, child readers of today will not be fully immersed in books like Blyton's or Nesbit's. Instead, such books will likely be introduced by well-meaning parents or grandparents and will form a tiny sliver of their cultural exposure. In my own childhood reading, the unfamiliar, formal British dialogue of Blyton's books seemed to render them all the more fantastic. I'm not sure that I wanted them to resonate with my contemporary reality. I did not want Jo to peer into Moonface's house only to find that Duran Duran were playing a surprise gig in there with Bubbles the chimp guesting on drums. I find it irritating when British books must be "Americanised" along the lines of Harry Potter. I suppose the question that I fixate on is, are children looking for magical fantasy in need of contemporary language use or is some of the archaic language part of the charm? Does every word need to immediately make sense? Does every saying have to reflect contemporary usage?

So I suppose I sit in the middle in that if present day child readers are going to devour Enid Blyton then any overt racism should be quietly expurgated. The quaint and unfamiliar language, and some of the unfamiliar practices (like Dame Slap, a maniacal wielder of corporal punishment, who we are positioned to dislike) is part of the appeal of the books. I know there have been abridged and altered versions of Huckleberry Finn, and its race politics has generated a lot of discussion about its appropriateness for today's child readers, but would publishers attempt to jazz up the language to make it seem more familiar? Or is the historical specificity part of what helps the reader make sense of a different world and its different conceptions of race and gender? Taking away the sense of temporal difference also takes away the context for understanding different historical worldviews.

Most posters on an Australian news item about the story seem to hold Blyton as sacred and unalterable, mentioning her in the same sentence as the Bible and Shakespeare. We know that there are various editions of these central texts of Western literature too, of course. What really seems to be being assaulted here is the childhood experiences of adult readers. I felt a similar outrage when 1970s and 1980s episodes of Sesame Street were released on DVD recently but labelled "not for children" because of particular elements that did not meet the requirements of present day educational theory (if memory serves, going home with strangers, possibly the suspicious Mr Hooper, was also part of it). I wonder then if the defence of Blyton is more about the defence of our own youth, than preserving the sanctity of some fairly ordinary prose that has just happened to sell 500 million books worldwide?
Posted by Michelle Smith at 4:19 AM

Bubbles coming into the Enid Blyton world and Duran Duran too would be fantastic.

And I'm sure there's a fan fiction about this somewhere.

With Blyton's works, there was a strong encouragement to enact, as in the Faraway Tree in Frankston example (Kananook Creek looks like there could be some adventures there, and any sufficient "faraway tree" would take place in the reader's imaginative experience, like the Wood Between the Worlds in Lewis). Nesbit, as well as being less widely read (except for maybe Railway Children and Five Children and It), is more dense and more passive.

The Sun picture shows a 2008/09 release of the hardback Famous Fives. And there was one book where the boys and girls did share chores. They were a tightly and loosely organised family unit. The one I am thinking of is Five Go on a Caravan.

Where is this bit about dirty gypsies? I remember it from the Imogen chapter in What Katy Did, and there were brigands and india-rubber! But I do not particularly remember it in Nesbit.

I wonder if there is Blyton fanfic? This could be a whole new area of research.

I think you're right about re-enacting the scenarios in Blyton's book. I was an overprotected child, so never had the chance to venture into anything remotely forest like, but I can imagine Faraway Trees being any place readers wanted them to be.

I don't have much recollection of the Famous Five books, but I could definitely envisage a team effort happening as Nesbit had already placed girls as relative equals in the Psammead books some time earlier (well, at least in my opinion).

The dirty gypsies in Nesbit are in Five Children and It. Some of the the gypsy women wants to take the baby, "the Lamb", from the children. Anthea clings on to the baby, keeping him safe from a gypsy with nineteen (!) children of her own with a face “the hue of mahogany, and her hair jet-black, in greasy curls”.

Off to check out Stuff What People Do. Thanks for the tip.

The closest "Faraway Tree" for me was probably either a liquid amber tree I had personal acquaintance with, or a peppercorn tree. Just that sense of thickness and possibility.

YES: there is Blyton fanfic. I have known about it since the beginning of this century. And YES it would be a fruitful piece of research.

In 2003 there was a big growth in saffic. And Blytonistas work in groups to write fanfic.